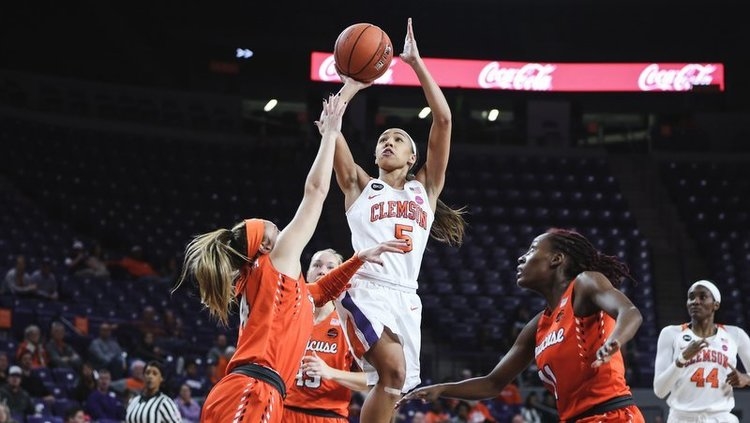 CLEMSON, S.C. — Propelled by critical plays the senior leaders, the Clemson Tigers (18-10, 9-6) took charge down the stretch to defeat the Virginia Tech Hokies (17-10, 4-10), 73-66, in Clemson’s final home game of the regular season. The Tigers outscored the Hokies by nine points in the fourth quarter en route to a hard-fought victory on Sunday, sending seniors Aliyah Collier, Danielle Edwards, Keniece Purvis and Simone Westbrook out in style.

"That was a tremendous win and Virginia Tech challenged us in really specific ways, especially in the first half,” said head coach Amanda Butler. “The seniors showed a tremendous resilient spirit and I am so happy for them.”

Clemson tallied 20 points off 19 turnovers and shot 47 percent from the floor in the second half as part of its second-half offensive turnaround. Junior Kobi Thornton led all players with 23 points and 10 rebounds on the afternoon for her ninth double-double of the season. Thornton was especially dominant in the second half, dropping 13 points on 6-of-11 shooting and hauling in seven boards.

For the seniors, Edwards barely missed out on a double-double, scoring 14 points and picking up nine assists. The guard also had six steals, and her defensive tenacity resulted in several fast-break buckets for the Tigers. Fellow seniors Collier and Westbrook recorded 11 points apiece and poured in key shots late in the comeback win.

The Tigers held an early 10-8 lead at the end of a defense-oriented first quarter that featured a humungous block by Thornton in the early goings. However, Virginia Tech was then able to take control of the contest by way of a 15-0 run that culminated in the Hokies going up 26-17 with 4:05 left in the second period.

Clinging to a slim 51-49 advantage heading into the final frame, the Hokies could not stop a determined Clemson team that shot 50 percent from the field in the fourth quarter. At the 2:57 mark in the fourth, Edwards drained her sole 3-pointer of the contest to provide Clemson with some breathing room and put the Tigers ahead by four. With momentum on their side, the Tigers closed the game going 6-of-6 from the floor to complete the come-from-behind win.

The Tigers head to Durham to take on the Duke Blue Devils (12-14, 4-10) in Clemson’s final game of the regular season on Thursday. Tipoff is set for 7 p.m. and the game will air on ACC Network Extra.