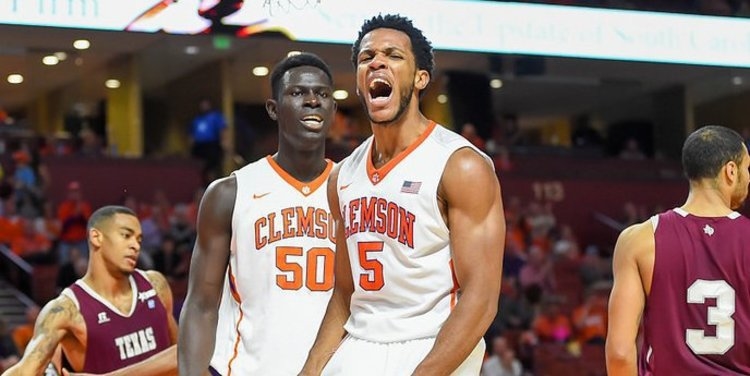 CLEMSON, S.C. — Graduate forward Jaron Blossomgame earned several honors from Athlon Sports and Lindy’s in their annual preseason magazines, recently released to newsstands across the country. Blossomgame was named a preseason second-team All-American and to the All-Senior First Team, while earning the distinction of being the nation’s No. 1 “inside-out” player by Athlon. He was also tabbed the nation’s top small forward by Lindy’s.

Blossomgame is coming off a busy summer. He attended the NBA Draft Combine and worked out for seven professional teams before opting to return to Clemson for his final season. In late July, he attended two prestigious camps, the Nike Basketball Academy and adidas Nations. In August, he earned his Clemson degree.

Blossomgame was named to the All-ACC First Team and was voted the ACC’s Most Improved Player in 2015-16 after averaging 18.7 points and 6.7 rebounds per game. His scoring average was the highest by a Tiger since 2000-01. Blossomgame produced 16 games with at least 20 points, including three with at least 30. He notched a career-high 33 in a game at NC State.

The Alpharetta, Ga., native excelled offensively in an efficient manner. He became the first Clemson player in history to shoot at least 50 percent overall, 40 percent from three and 75 percent from the free throw line over the course of a season.