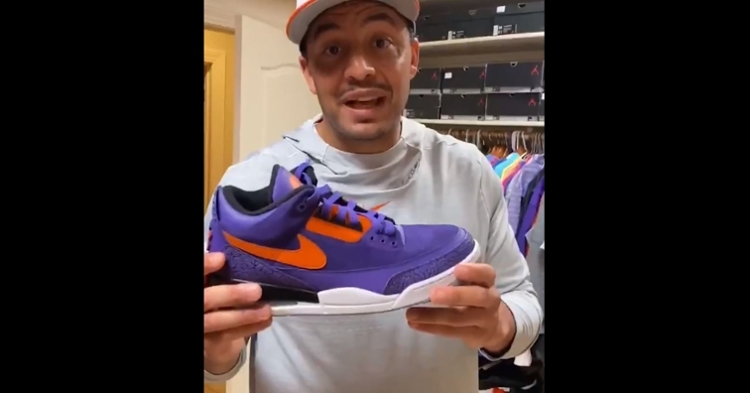 I think it's safe to say that Clemson offensive coordinator Tony Elliott is a big fan of Michael Jordan and Air Jordans.

Elliott gave Clemson fans an inside look at his closet filled with valuable and rare Air Jordans that he has been collecting for decades, including his one-of-a-kind Clemson Air Jordan 3 Tinker.

"Those that know me know I'm a huge (Michael) Jordan fan," he said in the following video called 'Kicks with Coach.' "I've been collecting shoes for a long time. Generally, I'm low-key with my collection, don't like to show it off, but with all the excitement around the 'Last Dance,' I've been called out, and it's time for me to ante up and show you guys what I got."

Don't think that Elliott just started collecting Air Jordans the last year or two as I actually remember him rocking Air Jordans back during his early college years.

Did he say one of one Clemson Air Jordan 3 Tinker?????

In honor of #TheLastDance @Coach_TElliott gives us a peek at his impressive Jordan collection! pic.twitter.com/pnFMa1elOG