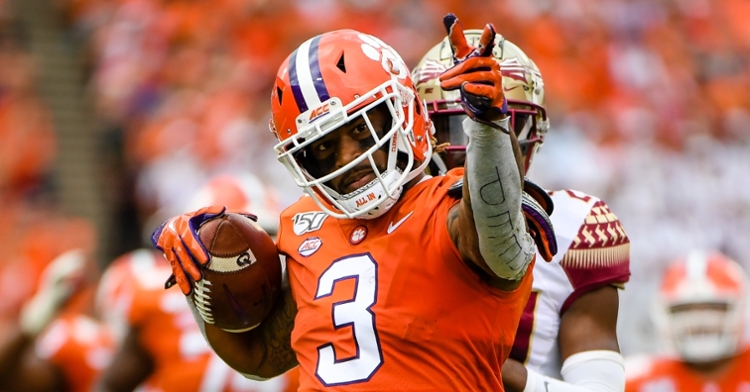 Clemson still has the best odds to make the CFP, per 538.

A pair of top-10 undefeateds went down this weekend to shake up the College Football Playoff projections after seven weeks.

After Georgia and Florida went down, ESPN's FiveThirtyEight gives Clemson the best odds to make the CFP (77 percent), followed by Alabama (56), Oklahoma (50), Ohio State (48), LSU (27) and Wisconsin (27). The defeats for the Bulldogs and Gators don't rule them out, however, with an over 90 percent projection for each if they are able to win out and take the SEC crown (Don't count on it though, as ESPN's FPI gives Georgia a six percent shot and Florida, two percent, to do that).

The 538 projections give Alabama a narrow edge over Clemson for title chances (21 percent to 19 percent).

CBS Sports' projections send the Tigers out to the Playoff semifinal Fiesta Bowl and a matchup with Oklahoma currently, opposite an Alabama and Ohio State matchup in the Peach Bowl.

Assessing the CFP as it stands now, seven of ESPN's Playoff Predictors do not have Clemson in their Playoff four, opting for a quartet of LSU, Ohio State, Alabama and Oklahoma. The Tigers are ranked as high as No. 1 among the group (Alex Scarborough).

ESPN's Kirk Herbstreit maintained his top-4 of Ohio State then Alabama, Clemson and LSU, with Oklahoma and then Wisconsin replacing Georgia in his first two out.