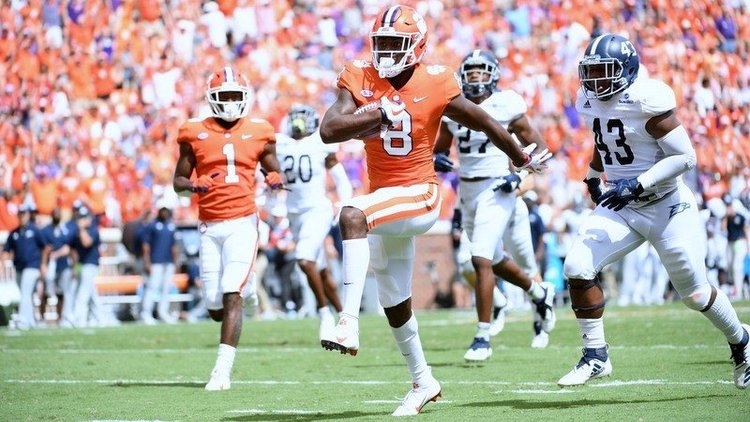 Clemson junior receiver Justyn Ross is set to have surgery for a congenital fusion in his back and spine Friday in Pittsburgh that will rule him out for the 2020 campaign, Tigers coach Dabo Swinney said Monday during a media teleconference.

Check out the latest reaction to Ross' injury on Twitter:

Joe Ngata and Frank Ladson are super talented but… 8 drops on 33 catchable targets beyond the line of scrimmage last year.

Clemson HC Dabo Swinney announced that WR Justyn Ross will have surgery and miss the 2020 CFB season. X-Ray revealed he has a congenital fusion in his neck/spine that he was born with. Was projected to be one of the top receivers in the 2021 class.

Feel terrible for Justyn Ross. Was poised to not only have a monster year and cement his legacy as one of Clemson's great receivers, but likely would have been one of the top WRs drafted and made a lot of money for his family. Now his football future is completely up in the air.

Here's to hoping Clemson?? WR Justyn Ross comes back better than ever with his recovery. #ALLIN pic.twitter.com/ePXzlPN3Fg

Wishing him a speedy recovery ??

Clemson will be without star WR Justyn Ross in the upcoming season pic.twitter.com/sq9N4XolaT

I’m putting everything i got into this season for you bro, believe that???? @_jross8 https://t.co/aF2NQtXRpp

Dabo says Justyn Ross will be one of the best coaches he will have this fall...he loves his teammates: https://t.co/HPTndBkqBa

Swinney says EJ Williams will be one of the young players that will have to step up with Ross out. Also mentions Ajou Ajou: https://t.co/Y48BxCZTbw

Swinney said he was shocked liked everyone else but the doctor tells him there's a good path for Ross to play football again. #Clemson

Ross' doctor is staying positive and thinks there's a good chance for Ross to play football again. But there are no guarantees.

The team wants to take him out of harm's way, avoid risk of paralysis, and hopefully by Jan will be ready to go. Then he can decide whether to come back and play or try NFL Combine. Similar to Mike Williams: https://t.co/EHm0br52kI

"The frustrating thing for Justyn is that he feels perfectly fine." - Dabo Swinney. Hopeful that by January he's doing great and has a decision to make between NFL and another year at Clemson. Devastating news for the Clemson WR.

Says if Ross was an accountant, could be back in six weeks. But with added risk of football they have to take time: https://t.co/X2NjNaxXAl

Swinney said Ross was hit during a practice and was slow to get up with some stinger symptoms but was fine on the sideline. Later Swinney was told by doctors Ross has a congenital fusion. #Clemson

Justyn Ross shocked the football world with this catch in the 2019 National Championship??pic.twitter.com/3wWeOzKdjh

Feel awful for Justyn Ross, who I thought had clear round 1 WR ability coming into this season

This is really serious injury, and not just a big college football story, but a big NFL story too. Clemson WR Justyn Ross was trending to be a first-half-of-the-first-round pick, and considered a better prospect than ex-teammate Tee Higgins. https://t.co/0XM2BSDuJ9

Terrible news here out of Clemson.

Ross was a stud coming out of high school. Just a few months ago he led the team in receiving vs. LSU. Also widely viewed as a first-round pick in next year's NFL Draft. https://t.co/CVOyRs2VlY

A big loss for the Tigers pic.twitter.com/rop90SC3eC