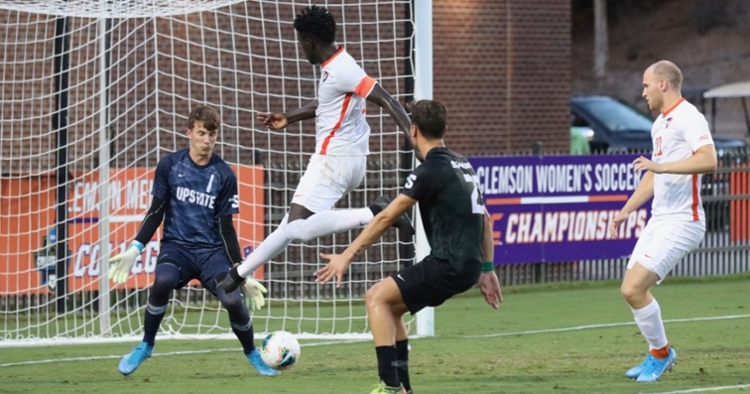 Clemson, S.C. – The No. 19 Clemson men’s soccer team put on an offensive clinic Monday night at Historic Riggs Field, dismantling the USC Upstate Spartans by a margin of 7-0. The duo of Robbie Robinson and Kimarni Smith each contributed a hat trick to the Tigers’ scoring effort, with Felipe Fernandez joining in with a goal of his own.

The duo’s hat trick was the first instance of teammates scoring three goals in the same game since November 11, 1986 when Gary Conner and David Fortner completed the feat against Mercer.

Clemson outshot the Spartans by a margin of 18-6 in the first half and 27-7 overall in the match, putting 15 of their shots on goal to the Spartan’s one. The stats tell the story of Clemson’s dominance over the Spartans, with the attacking force orchestrating a consistent barrage on the Spartan’s defense. The seven goals by Clemson is their second most this season and bring their season tally to 21.

“I thought tonight we were clinical. I’m very proud of the guys tonight. The first 15-20 minutes wasn’t great, and to play on a Monday night in hot conditions, I thought we responded really well and when we got that first goal things started to fall”, said Head Coach Mike Noonan.

The second half of play saw no change in the Tigers’ first-half dominance. Smith made the score 6-0 in the 51st minute of play and closed out his hat trick in the 64th minute from the penalty spot.

Head Coach Mike Noonan spoke on the phenomenal play by Smith and Robinson by saying, “They have been developing the past couple of years and we expect at this point that they have that timing together.”

The Tigers were led in their pursuit of victory by seeing 22 players enter the match. The scoring efforts were aided by seven different players contributing an assist, with eight assists being awarded on the night. The 22 points tallied by Clemson is the second-most this season and adds to the Tigers’ impressive tally of 48 points entering the night.

The 4-0 start for the Tigers is their best opening performance since the 2017 season. The Tigers will travel to face Notre Dame on Friday, September 13 in their opening match of ACC play. The match will be the first road test for the Tigers in their 2019 season.