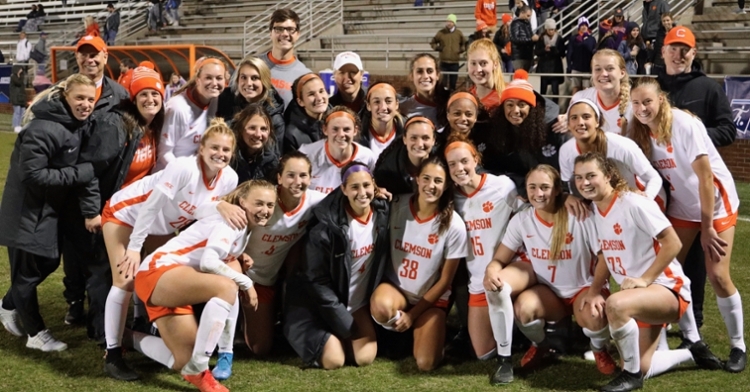 Clemson, S.C. - The Clemson women’s soccer team punched their ticket to the second round of the NCAA Tournament after battling to a scoreless draw and advancing on penalty kicks over the Vanderbilt Commodores. Clemson awaits its second round opponent with the first round of competition still in play.

“All the credit goes to these girls,” Head Coach Eddie Radwanski said, “The power of belief, the power of hope of what they could do and never giving up, that’s what I’m proud of with our group.”

The Tigers and Commodores split possession in the first half of action with Clemson holding the shot advantage 6-4 after a late surge of strikes. However, Vanderbilt rallied a flurry of opportunities late in the match, forcing Sandy MacIver to come up big for the Tigers.

Two overtime periods would expire without either team finding the deciding goal. Clemson held the shot total 19-10 with nine of their strikes landing on target prior to entering penalties. Renee Guion kicked off the action by netting the first attempt before Vanderbilt found a response of their own. The next two sets of attempts for both sides would find the back of the net before Clemson’s fourth attempt was saved. Despite the Commodores netting their fourth chance, Clemson would clinch it with two of their own before a Vanderbilt miss and clinching save by MacIver. The final score would go down as a 0-0 draw with Clemson advancing 5-4 on PKs.

MacIver would finish the evening with six saves across 120 minutes of action. Eight separate Tigers registered a shot with Mackenzie Smith leading the way with four.