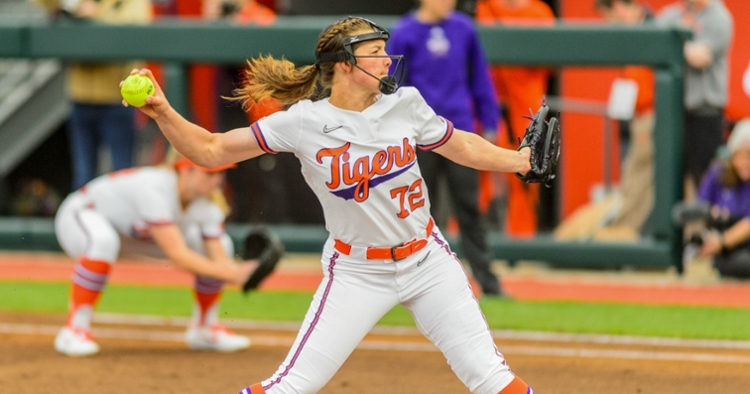 Valerie Cagle went the distance in the win.

CLEMSON, S.C. – After giving up a run in the top of the first, freshman righty Valerie Cagle and Clemson’s defense held Maryland scoreless the rest of the way in a 5-1 win on Friday afternoon in the Big Ten/ACC Challenge opener. The Tigers evened their record at 4-4 on the year, and improved to 2-1 in the new Clemson Softball Stadium.

Friday’s game gave Clemson a third-straight sellout to open the park, where the Tigers have given up just three runs in three home games.

Cagle (2-3) went the distance, scattering seven hits over seven innings while striking out eight and walking just one. Cagle recorded 11 groundouts with no flyouts in the contest.

Offensively, freshman Hannah Goodwin went 3-for-4 with an RBI, and JoJo Hyatt went 2-for-3 with a pair of RBI singles in the win.

After falling behind 1-0 in the top of the first, the Tigers found footing in a three-run fourth. Marissa Guimbarda’s home run to center tied the game at 1-1. Alia Logoleo tripled to right center for her first career hit to score Carlee Shannon, and then scored on a squeeze by JoJo Hyatt.

Hyatt added another RBI single in the fifth, scoring Arielle Oda. Goodwin tacked on another, knocking in Grace Mattimore on a fielder’s choice.

Up next, the Tigers return to Clemson Softball Stadium Saturday at 12:30 p.m. in a rematch against Maryland, before taking on Michigan State at 5:30 p.m. Fans planning to attend Saturday’s Big Ten/ACC Challenge tournament action at Clemson Softball should plan accordingly as Clemson is set to host seven home events Saturday.

Marissa Guimbarda sends a shot over center to tie the game 1-1. ????
That is also her first homer at Clemson Softball Stadium.

??????Alia Logoleo's first career hit, a triple to right-center field, gives the Tigers their first lead of the game over the Terrapins.

JoJo Hyatt lays down the squeeze to score Logoleo, putting the Tigers up 3-1. ????