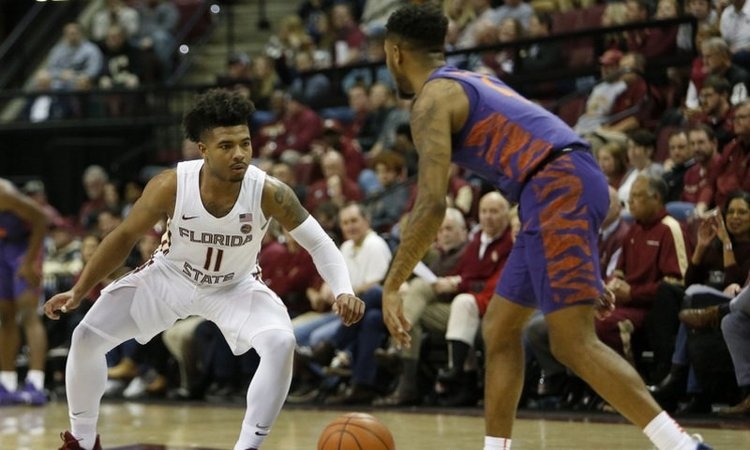 Clemson went cold again from beyond the arc to fall behind in the second half. (USA TODAY Sports-Glenn Bell)

The Tigers led by as much nine points and held the edge well into the second half, but Leonard Hamilton’s Seminoles jumped on top with a 13-0 run and didn’t let up to send the Tigers home with a 77-68 loss.

Both teams had success shooting in the first half, with the Tigers getting a tip-in at the buzzer from Aamir Simms for a six-point edge.

Simms put the Tigers in position for the late-half surge with 15 points in the first period, knocking down 3-of-4 from beyond the perimeter. Simms finished with a game-high 18 points with five rebounds.

Both sides cooled off from beyond the arc to start the second half, going 0-for-5 combined through the second media timeout, but then the Seminoles found their stroke. FSU hit three 3-pointers in a row to take its first lead in nearly 19 minutes of game-time with just over 8 to go.

After the Seminoles extended their lead to as much as eight points, Clemson fought back - timely buckets from Marcquise Reed and Simms cutting into the deficit and David Skara scoring his first points with 4:14 to go on a 3-pointer, making it a 3-point game.

Clemson would miss its final four shots of the game, however, as FSU answered the mini-run by outscoring Clemson 12-3 into the final seconds. After the 50 percent shooting start, Clemson made 1-of-9 3-pointers in the second half.

Clemson stays on the road with a trip to No. 21 NC State on Saturday (2 p.m./ACC Network).

Game notes: Elijah Thomas notched his fifth double-double of the season and the 16th of his career … Clemson moves to 12-4 overall when Thomas posts a double-double … Thomas also dished out a career-best five assists … he had previously posted three helpers on seven occasions … with 11 rebounds, Elijah Thomas now has 526 for his Clemson career – just 78 shy of cracking the top 25 in Clemson history … Marcquise Reed scored 13 points for his 56th double-figure scoring game of his career … Reed is 14 double-figure scoring games shy of tying for 16th all-time in program history … with his 13 points, Reed now owns 1,171 career points and ties Randy Mahaffey (1964-67) for 28th on the all-time list … Aamir Simms’ 18 points marked his ninth double-digit scoring game of the season and his second-highest offensive output of the year.