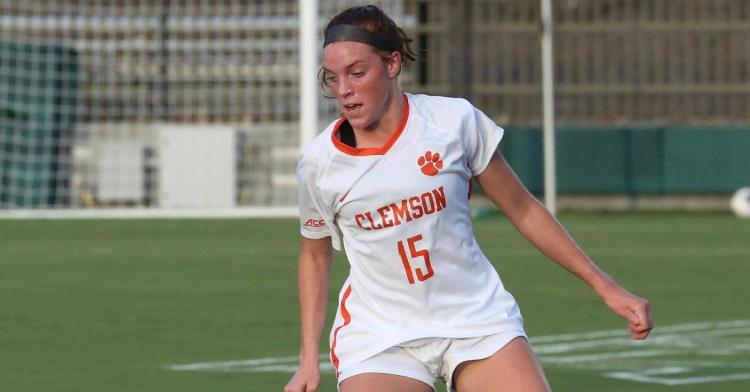 Louisville, Ky. - The ninth-ranked Tigers fell in a 1-0 decider on the road against No. 16 Louisville. Clemson moves their season record to 8-3-1 with a 2-3 mark in conference play.

Louisville got things started on home field, capitalizing on a corner kick chance in the third minute. A sprinting Callie McKinney was able to connect with the set-piece, arching the ball just enough to beat the Clemson backline. Despite an early goal by the Cardinals, the remaining 42 minutes of the first half would run out without any additional scoring chances from either team, sending the Tigers into the locker room with a 1-0 deficit.

“We made a simple mistake that we normally don’t do and got punished for it on the corner,” Head Coach Eddie Radwanski said. “We needed more energy and quality but we weren’t able to find that today.”

Regardless of Louisville holding an 8-0 record when scoring the first goal and 5-0 streak when leading at halftime, the Tigers put up a relentless attack in the second half of action by doubling their shot total from the first 45 minutes of play while maintaining a strong attacking zone presence. Clemson outshot Louisville 8-2 with a 6-1 corner kick advantage in the second half but was unable to find the equalizing strike.

“The response in the second half was good and it was encouraging to see the turnaround,” Radwanski added. “Although you may dominate the half, you still need to get something from it and unfortunately we didn’t. We will get back to the drawing board and be better for another tough match against Duke on Sunday.”

The Tigers have a short break before hitting the road once again to face off with the No. 11 Duke Blue Devils in Durham, N.C. on October 13. The 1 p.m. match will conclude Clemson’s recent three-game road stretch before returning to Historic Riggs Field on October 19 as they host Syracuse in a 7 p.m. match.