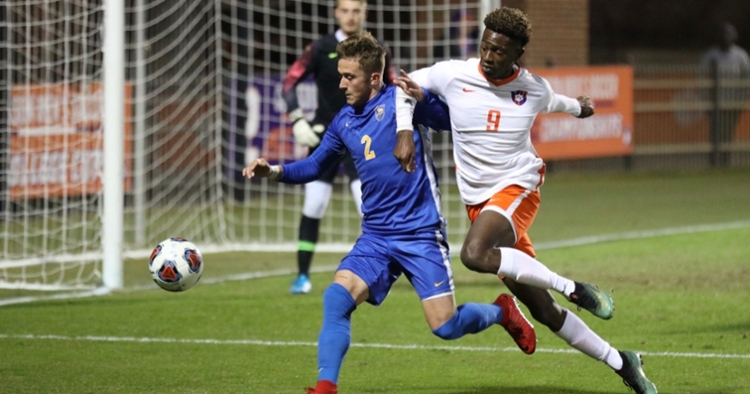 Clemson, S.C. - The top-seeded Clemson men’s soccer team (16-1-1) defeated the fourth-seeded Pittsburgh Panthers by a 1-0 scoreline to secure its spot in Sunday’s ACC Championship match. Clemson was dominant on the offensive side of the ball, logging 16 shots and earning nine corner kicks throughout the match. The Tigers’ attacking force was held to scoring less than two goals for only the second time this season. 15 players saw time for the Tigers on Wednesday.

The Tigers saw impactful performances out of George Marks, Philip Mayaka and Mohamed Seye on the night. George Marks logged six saves and provided crucial clearances on the Panthers’ numerous set-piece opportunities. The shutout result gave the team its 10th clean sheet of the year, seven of which came from solo efforts by Marks. Philip Mayaka showcased why he was voted the league’s Freshman of the Year, controlling the pace of which the Tigers’ attack was executed while winning physical matchups against the opponent’s side. Mohamed Seye’s goal in the 44th minute proved to be the deciding factor in Wednesday’s match, with Seye converting in front of net after Oskar Agren and Tanner Dieterich executed a string of precise passes to move the ball down the field.

“When you play as well as we did defensively tonight, all you need is one. Mohamed [Seye] has been doing this all year, he comes up big in big spots. Tanner [Dieterich] was fantastic again. He’s been key to the turnaround of this team in terms of his internal leadership and is probably the most complete and consistent player we’ve had all year.”

No. 1 Clemson will face No. 2 Virginia on Nov. 17 at noon in Cary, N.C., at WakeMed Soccer Park. This will be the ninth time the two teams meet in ACC tournament play, with Sunday’s match serving as the fifth meeting between the two sides with an ACC title on the line. The contest will be a rematch of the ACC championship game in 2001, which saw the Tigers earn a 1-0 victory over the Cavaliers.

FINAL || CLEMSON IS GOING TO THE FINALS!

The Tigers ?????? Wednesday's semifinal match over the Pittsburgh Panthers off of Mohamed Seye's goal late in the first half.#ClemsonUnited pic.twitter.com/XustZk7moB

Morning mood ??#ClemsonUnited gets the chance to play for another ?? on Sunday! pic.twitter.com/nxOpv6t0wN