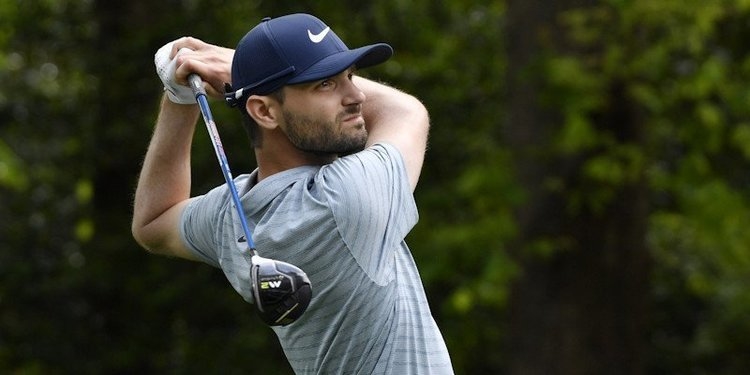 Kyle Stanley will be the first former Tiger on the course. Photo: Michael Madrid / USAT

This will be the first time since 2012 and just the third time in history that three former Tigers will play in the British Open. In 2012, Stanley, Glover and Jonathan Byrd played in the Open Championship. Byrd, Glover and Stanley played in the 2011 tournament.

Stanley will be the first former Tiger on the course. The 2007 and 2009 first-team All-American will begin play at 3:36 a.m. eastern time and is paired with Bob McIntye and Andrew Johnton. Glover will start at 4:14 a.m. eastern and will play with Joost Luiten and Nino Bertasio. Redman, playing in his first Major as a professional (played in Masters as Amateur) will start at 10:32 a.m. and will play with Kevin Streelman and Robert Rock.

With the many hours of daylight, all groups begin on the first tee at the Open Championship.

Glover is coming off a 10th place finish at the John Deere Classic in Illinois, his sixth top 10 of the season. The native of Greenville, S.C. who played for the Tigers from 1997-01, is 28th in the FedEx Cup standings so far this year and has already won $2,184,709. He had the first double eagle of his PGA Tour career last Friday on the 10th hole when he made a shot from 255 yards.

Glover, ranked $76 in the World Golf Rankings, is making his ninth appearance at The Open Championship, but his first since 2013. He has made the cut four times, including 2011 at Royal St. George’s when he finished 12th with a 283 score. That is the best finish by a former Clemson golfer at the Open Championship.

Stanley stands as the #57 player in the latest World Golf Rankings. He is # 112 on the FedEx Cup standings and has won $953, 201 so far this season. He is 20th on the PGA Tour in driving accuracy. He is coming off an 18th place finish at the John Deere Classic. He has made the cut at three of his previous five Open Championships and his best finish is 39th, which he has done twice, 2012 and 2018.

Former Clemson All-American and US Amateur Champion Doc Redman finished second at the Rocket Mortgage Classic on the PGA Tour with a score of 19-under-par 269 and qualified for The Open Championship by virtue of the second place finish at the PGA event in Detroit a few weeks ago. He shot rounds of 68-67-67-67 to finish with his 19-under par score. With the second-place finish, Redman won $788,400. He has now won $911,940 and is close to earning his PGA Tour card for next year.

That week in Detroit was a professional career changer for Redman, who played for the Tigers in 2016-17 and 2017-18. The native of Raleigh, NC was an All-American both years when he helped Clemson to the NCAA National Tournament and top 16 final rankings. Redman won the 2017 U.S. Amateur at Riviera Country Club in Los Angeles in August of 2017, just the second Clemson player to win that USGA event.