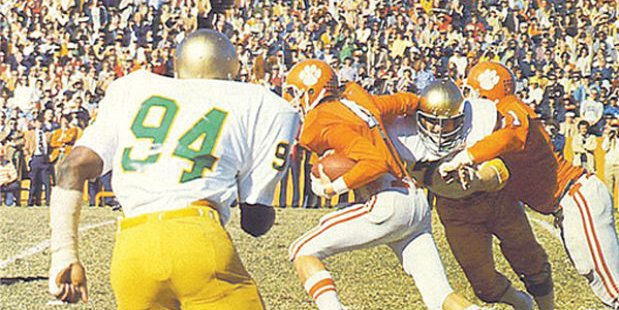 Greenville, S.C.: The South Carolina Football Hall of Fame (SCFHOF) is proud to announce the Class of 2019 and information on the annual Enshrinement Ceremony. The 2019 Enshrinement Ceremony and VIP After-Party is set for April 23, 2019 at the Hilton Greenville. The Class of 2019 will include five inductees, one being a legacy inductee. The legacy inductee honors those who have come from a past generation but laid the foundation for football in the state of South Carolina and beyond. The 2018 Blanchard-Rogers Trophy (Collegiate Player of the year) presented by Hale’s Jewelers, and the 2019 Humanitarian of the Year presented by Trehel Corporation will also be honored at the ceremony. These honorees will be announced at a future date.

Born in Macon, GA, Bryant was a three sports star at Willingham High School before going to the University of South Carolina to play baseball and football. While at Carolina, Bryant lettered in both football and baseball for three years and was named the ACC Athlete of the Year in 1966 and 1967 (Anthony J. McKelvin Award). Bryant still holds the record for the longest punt return in Gamecocks history with a 98-yard punt return. The New York Daily News and the Detroit Sports Extra named him to their All-American teams. After college, Bryant was drafted by both the New York Yankees and the Boston Red Sox but decided to pursue professional football. He was drafted by the Minnesota Vikings in the seventh round in 1967 and remained with the Vikings for 14 seasons. With the Vikings, Bryant played in 11 divisional title games and is one of 11 people to play in all four of Minnesota’s Super Bowl appearances. Bryant played cornerback as a member of “Purple People Eaters” and is the second all-time interceptions leader in Vikings history. Bobby has been named one of the 50 greatest Vikings of all time. After retiring, He stayed in Minnesota for five years and then decided to come back to Columbia, SC to work and raise a family. Bryant was inducted into the University of South Carolina Athletic Hall of Fame in 1979 and is also a member of the state of South Carolina Athletic Hall of Fame as well as the Georgia and Macon Sports Hall of Fame.

Davis was born and raised in Spartanburg, SC where he attended Spartanburg High School. In high school, he played football and ran track as he set the state record for the 100-meter with a time of 10.40 in 1991. In 1992, he became the No. 1 high school football recruit in the nation and named USA Today’s Offensive High School Football Player of the Year. Following high school, Davis accepted a football scholarship to Auburn University. He played at Auburn for three years ’93-’95, where he was named to the All-SEC Team in ’94 & ’95. Davis graduated in 1995 as Auburn’s fourth all-time leading rusher and currently holds the record for rush attempts (1,945), rush yards (8,052) and rushing TDs (65) amongst all Auburn alumni in NFL history. Davis was selected 103rd overall in the 1996 NFL Draft by the Washington Redskins. In 1999, he had his breakout season by leading the NFC in rushing yards (1,405) and the NFL in scoring by a non-kicker with 108 points. After seven seasons with the Redskins, he signed with the Carolina Panthers. There he set his career rushing record with 1,444 yards including eight rushing touchdowns. In 2006, Davis signed a one-year contract with the St. Louis Rams and then later signed a one-day contract with the Carolina Panthers so that he could officially retire as a Panther on February 27, 2008. He now resides in Columbia, SC.

Fuller was born in Enid, Oklahoma but grew up in Spartanburg where he played quarterback at Spartanburg High School. He would go on to play at Clemson University, where he led the Tigers to back-to-back bowls in 1977-78 with an All-American 11-1 season in 1978. Fuller was named ACC Player of the Year, made the All-ACC Team, and was an Academic All-American in both 1977 and 1978. Fuller, the Frank Howard Award recipient in 1978-79, was elected into the Clemson Hall of Fame in 1985 and the Clemson Ring of honor in 1994. Fuller’s jersey #4 was later retired by Clemson and then brought back into action by Deshaun Watson. In 1979, Fuller was drafted by the NFL's Kansas City Chiefs in the first round; he played ten seasons in the NFL with the Chiefs, Rams, Bears, and Chargers. He was the backup quarterback for the Chicago Bears in 1985, when they won Super Bowl XX and was a part of the “Super Bowl Shuffle” Rap Video that hit Billboards top 100 chart with over 500,000 copies sold. Fuller, now resides in Bluffton, SC with his with wife, Anna. Steve and Anna have two adult children, Stephen and Alexandra. He serves as the offensive coordinator for the Hilton Head High School football team.

Born in Greer, SC, Steve attended Greer High School and was a 2x winner (1963, 1964) of the South Carolina Class AA Lineman of the Year. He was named to the Shrine Bowl (1964) & North-South All-Star (1965) football games, where he was named Most Valuable Lineman in both games. In 1964, he was named a Parade High School All-American. From there Steve accepted a scholarship to the University of Georgia, where he was a three-year starter. Steve played in three bowl games, including the1968 Sugar Bowl as SEC Champions. In 1969, he was named first team All-SEC, an All-American, won the Atlanta Touchdown Club award for Most Valuable Lineman in the SEC, and was named permanent team captain of the Georgia Bulldogs. Greer played in two post-season college all-star games (Lions American Bowl/Hula Bowl) before playing in the CFL with the Toronto Argonauts. After his CFL career Greer came back to Georgia as a grad assistant (1971) and then became an assistant coach at Auburn University (1972-1978) before returning as an assistant coach for UGA. In total, Steve Greer, dedicated more than 35 years with the Bulldogs as a Player, Assistant Coach (1979-1993), and Director of Football Operations (1994-2009). Steve was among the 1980 Georgia National Championship football team as Defensive Ends Coach & Recruiting Coordinator. He is known as the primary recruiter for legendary Bulldog running back Herschel Walker. He retired from UGA in 2009 and in 2014 he was inducted into the UGA Circle of Honor. Steve now resides in Athens, GA with his wife Susan of 50 years.

David Gardiner “Dode” Phillips, lll (January 2, 1900 – December 29, 1965) was born and raised in Bradley, SC of Greenwood County. Dode attended Chester High School where he was a three-sport athlete letterman. Through his efforts on the field, Phillips was awarded an athletic scholarship to Erskine College, where he played both football and baseball. Phillips was the hammer of the Erskine football team, leading them to victory over the University of South Carolina and scoring every point in their 13-0 victory over Clemson University in 1921, in which, he scored both TDs and kicked the extra point. Clemson coach Frank Howard once said, “I’ve seen football players in the East, in the South and on the Pacific Coast, but I never yet seen a fullback that was equal to Dode Phillips. Many of the best that the game has produced… have not been in Phillips’ class”. Phillips athletic awards came after his playing days. In 1958 he was awarded the Service to Sports Award by the ACC Sports Writer Association, in 1965 he was elected into the NAIA Football Hall of Fame, and is a charter member in the state of South Carolina Athletic Hall of Fame. After college, Dode began a professional baseball career with the Durham Bulls but shortly after retired for his religious beliefs, he would not play on Sunday. “Those of his era vowed that Phillips would’ve made it to the majors”. Dode decided then to take on coaching high school football in Anderson, SC, then in Moultrie, GA, and ended at the college level at Erskine. Dode spent the remainder of his days sharing the Gospel, which some stated that was Dode’s real sport. At the time of his passing, he was called Mr. Football of South Carolina as the greatest athlete in South Carolina for the first half of the twentieth-century.