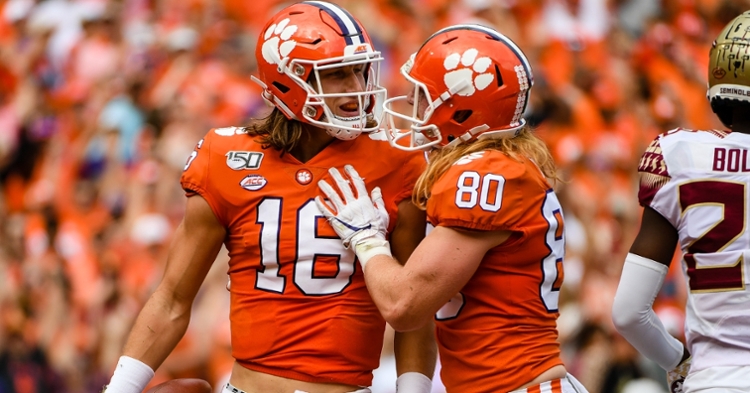 If Clemson can't reach the top spot, the No. 4 team may very well determine their potential CFP semifinal location.

Elsewhere under the four-letter network’s umbrella, the FiveThirtyEight metric has virtually eliminated Alabama, which hold a 12 percent shot if Clemson wins out. With LSU a lock for the SEC title game, Alabama can at best finish 11-1 and misses out on a championship game to reach the 12 wins possible for CFP and championship contenders like Georgia, Oregon, Oklahoma, Utah, Minnesota and Penn State (current undefeateds excluded).

Still needing a strong finish, they are in some rarified air with the best in college football in a number of metrics.

A clear top-three has emerged going into the final three weeks of the regular season-plus-championships, and outside of those offensive and defensive efficiencies, their resumes can be hard to judge.

A symptom of the lower SOS, defenses Clemson has faced are ranked 72nd on average per SP+ currently, while the top Tigers defense has met a solid group of offenses (43rd-ranked average). For comparison, Ohio State has played a 58th-ranked offense and 41st-ranked defense on average and LSU has matched up with a 49th-best offense and 43rd-best defense.

Looking ahead, Virginia Tech is the best team Clemson could play left currently by the polls (No. 25 in AP/No. 26 in Coaches/NR by CFP), while Ohio State can rack up a pair of top-10 CFP wins (No. 8 Penn State and No. 10 Minnesota) and another top-15 (No. 13 Michigan) -- LSU can stack on their top-ranked strength of record versus a likely 11-1 Georgia (No. 4 in CFP) in the SEC title game.

In the big picture, Ohio State stands a good chance at taking over the CFP No. 1 spot going into the championship weekend and the committee could have quite the discussion on its hands if LSU falls to Georgia, especially if one-loss champs emerge out of the Big 12 (Oklahoma or Baylor) and PAC-12 (Oregon or Utah). That seeding can affect Clemson's potential Playoff semifinal destination, as the proximity of the lower-seeded team to the bowl site has emerged as a prominent factor in the 1 vs. 4 matchup (see Alabama versus Oklahoma to Miami in 2018). A team West of the Mississippi could very well land in Atlanta as a fourth seed, while sending the 2 vs. 3 game to the Fiesta Bowl in Arizona.