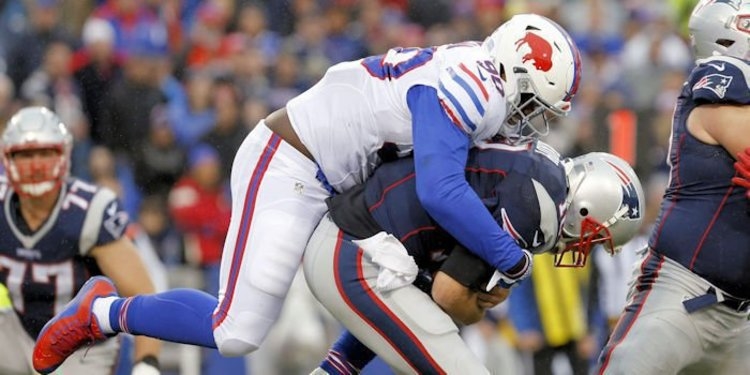 Buffalo Bills defensive end Shaq Lawson missed the first six weeks of his rookie season recovering from shoulder surgery and finished the year with only 13 tackles, two sacks, a forced fumble, and a pass deflection.

The second-year defensive end knows there is pressure to make plays after he was picked in the first round with the #19th overall pick in the 2016 NFL Draft.

"I’m going to live up to that," Lawson said via the Buffalo News. "That’s what they want me to do. I’m going to give them a reason why they drafted me here as a first-round pick. It’s time to bring what I had back when I was in college."

If he becomes the player he was at Clemson then Bills fans will be ecstatic.

Lawson finished his final season at Clemson with 86 tackles, 25.5 tackles for loss (first in the nation), 12.5 sacks and 15 quarterback hurries. These gaudy numbers landed him as a consensus first-team All-American, a finalist for the Hendricks Award, the Bednarik Award, the Lombardi Award and the fourth player since 2011 to go from Daniel High School to Clemson to the NFL. For his collegiate career, he had 167 tackles, 46.5 tackles for loss, 20 sacks, 29 quarterback pressures and two fumble recoveries.

One of the major problems besides his shoulder issue his rookie season was that the Bills defense was running a 3-4 scheme and making him cover running backs out of the backfield and doing things that were not in hs comfort zone.

"When I got up there, I was thinking a lot," Lawson said. "I had to make sure I didn’t mess up an assignment because it was very difficult. The playbook we had last year was difficult to learn."

However, this year they are running a more basic 4-3 scheme with him at defensive end and Lawson will only have to worry about rushing the passer which is his bread and butter.

"The defense is simple. It’s the same thing I ran at Clemson. I picked it up a lot faster, and I’m very comfortable right now and I’m ready to play ball."