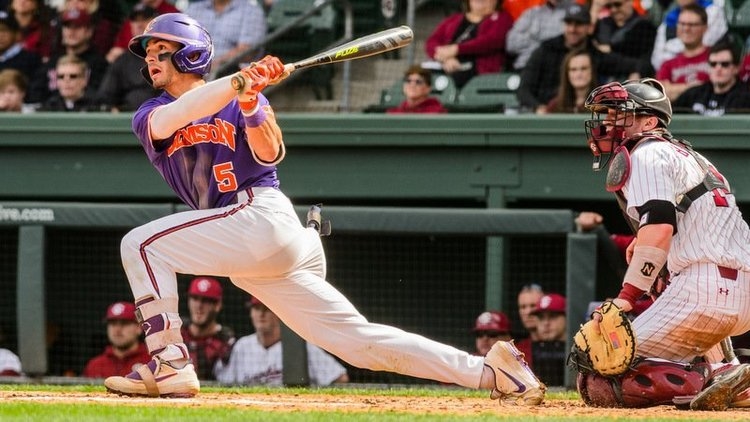 A rough close to the rivalry weekend series in Columbia meant the first major move in the polls for Clemson baseball on Monday.

Monte Lee's Tigers dropped out of the D1Baseball Top 25 and held on to a No. 21 ranking with Baseball America.

Clemson started last week tallying double-digit runs and hits in wins over East Tennessee State (14-3) and South Carolina (11-4) but a one-run loss at home to the Gamecocks proved to be the tipping point in the series - South Carolina's lineup being too much in Columbia Sunday (14-3 loss; 17 hits surrendered).

The D1Baseball poll had four newcomers in all, with South Carolina earning a No. 24 ranking. The Gamecocks jumped to No. 20 in the Baseball America poll.

The Tigers currently lead the ACC in home runs (22) but rank seventh in on-base percentage (.389) and 11th in batting average (.267). The pitching staff ranks 13th in ERA (4.41) with the most home runs surrendered (13) but they've also totaled the second-most strikeouts (134) and seventh-best opposing batting average (.224). Clemson begins ACC play this weekend hosting No. 3 UNC.

Clemson returns to action on Tuesday at Fluor Field versus Furman (6 p.m. start).