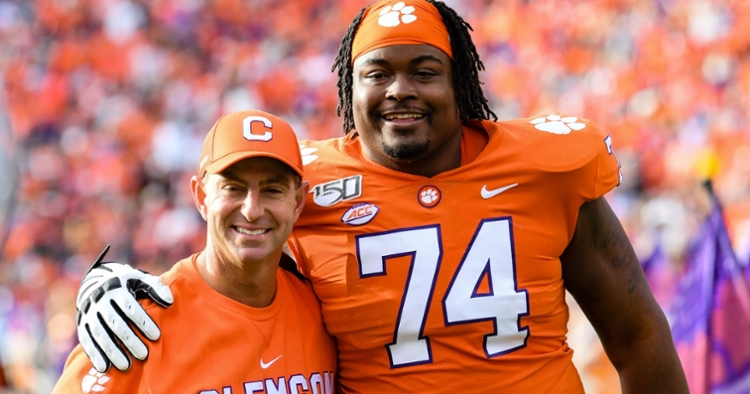 Simpson was selected 109th overall by the Raiders in the 2020 NFL Draft. He is estimated a $4.1 million contract with a $797K signing bonus (Spotrac).

A four-year player at Clemson, Simpson appeared in 50 games with 29 starts and helped the school capture two National Championships in 2016 and 2018. During his two seasons as a full-time starter, he helped the Tigers post a staggering 29-1 record.

As a senior in 2019, Simpson was named a first-team All-ACC selection and recognized as an Outland Trophy semifinalist, given to the nation's top interior offensive lineman. He started all 14 games and was named ACC Offensive Lineman of the Week three times en route to a consensus All-American selection by the AFCA, FWAA, Sporting News and WCFF. He became just the sixth Clemson offensive lineman to earn consensus All-American honors in program history.

A native of North Charleston, S.C., the 6-foot-4, 330-pound guard played at Fort Dorchester High School prior to entering the college ranks. He was ranked as the No. 232nd player in the nation by ESPN.com and was invited to the US Army All-American game following his senior year in 2015.

Drafted, engaged, now signed... @BigJohn74_ has a lot to be smiling about this year. ??@ClemsonFB ? #RaiderNation pic.twitter.com/jP8RT9OVGC