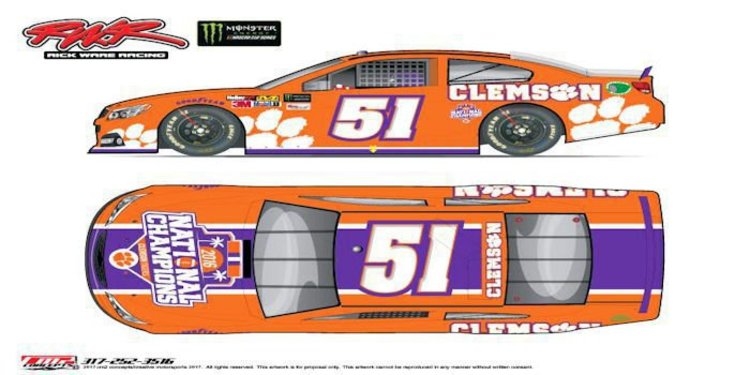 The Clemson National Championship logo will adorn the hood of a car on NASCAR’s top circuit at the Pocono 400, Rick Ware Racing announced today. Clemson will serve as the primary partner for the #51 car both this weekend at the Axalta presents the Pocono 400 and again on Sept. 3 at the Bojangles Southern 500 at Darlington.

“We’re appreciative of Rick Ware Racing offering this opportunity for tremendous exposure of our National Championship mark during the Monster Energy NASCAR Cup Series,” Clemson Director of Athletics Dan Radakovich said. “We look forward to seeing this great design on the track at Pocono and Darlington.”

"This is a marketing program that allows Universities and their supporters the opportunity to experience the many hands-on sectors that a NASCAR team has to offer,” he said. “We couldn't be happier having East Carolina University join us for three race and we are eager to unload this great looking race car at Dover.

“We are also equally enthusiastic at the response we have from many other great Universities from all over the country and look forward to promoting their Universities at other races on the NASCAR schedule."

Rick Ware Racing will compete in their 12th Cup Series race of the season at Pocono Raceway on June 11.