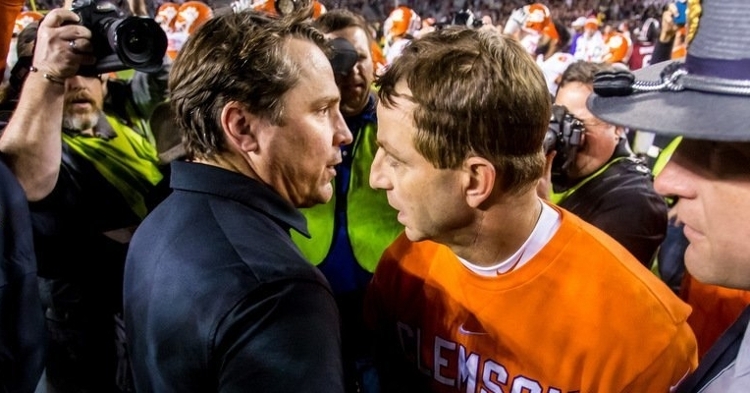 Muschamp finished 0-4 against the Tigers.

“It’s a very tough business as we all know,” Swinney said on his call-in show. “As coaches, you’re only as good as your last game and certainly year-to-year. It’s not something that you enjoy seeing. He’s got kids. He’s got a wife. I know it’s a passion for a lot of people, but this is our livelihoods and it’s what we’ve invested our lives in. My heart breaks for him and I understand -- I get it. Certainly thoughts are with he and his family. I know the Good Lord will open up a door somewhere and they’ll hire a great coach down there and so forth. It’s the really tough part of this business -- that’s for sure.”

Swinney said their paths didn’t cross often from a social standpoint but that Muschamp was gracious when they did.

“I don’t have a very close relationship with him...We’ve been around each other a few times but mostly have competed against each other,” Swinney said. “He was at Auburn and I was at Alabama. He was at LSU and vice versa. Probably the most time I’ve spent with him was when he was at Texas and we went out with my staff. He was incredibly gracious with his time. Super nice. Really, really helpful. Spent a lot of time with our staff. That was probably the most time I’ve been around Will. The rest of the time it was just competitive environments and stuff. He’s always been well-respected in this profession as a great coach. We compete against each other and he’s our rival and all that, but these are lives. I’m not the person cheering that someone lost their job.”

More from the call-in show

WR injuries: Swinney said Joseph Ngata has had one healthy game and “it’s just been a struggle” since the Wake Forest game. Swinney reiterated that he’s probably the best wide receiver on the roster. Swinney said that Frank Ladson has “had a couple setbacks” and will be out “a couple weeks.” Swinney continues to be “optimistic” on Justyn Ross’ recovery and they’re hoping for more good news in December on his next big check-up. Ross, as Swinney has said before, is guaranteed to be out for the 2020 season no matter the prognosis but he could be cleared for spring ball.

On Trevor Lawrence: "He's ready. He's chomping at the bit. He's so excited. It's almost like an opener again. He's been anxious to play for a couple weeks and ready to go."

Swinney said that Clemson’s Thanksgiving protocol will be mostly the same around the pandemic precautions: “It’ll be a normal Thanksgiving like any year for us. We practice. We have meetings on Thanksgiving Day -- that’s just a Thursday practice for us. Typically what we do...for us, they get out of class -- they’re all kinda virtual anyway -- we will practice on Thursday but practice earlier. We typically have a team Thanksgiving dinner Wednesday night and we won’t be able to do that as a whole group as we have in the past. We will have Thanksgiving (food) available (Wednesday) and they can eat it or grab-and-go and all that stuff. We can’t really do our family night dinners with all that’s going on. And on Thursday, we’ll break out of here at usually about 2 o’clock on Thanksgiving every year and we’ll have food for them or they will go to a coach’s house or a lot of time their families come into town and they’ll eat with their families and we’re right back at it on Friday morning. That’s really our routine and it’s been that way a long, long time. And that’ll be the same.”