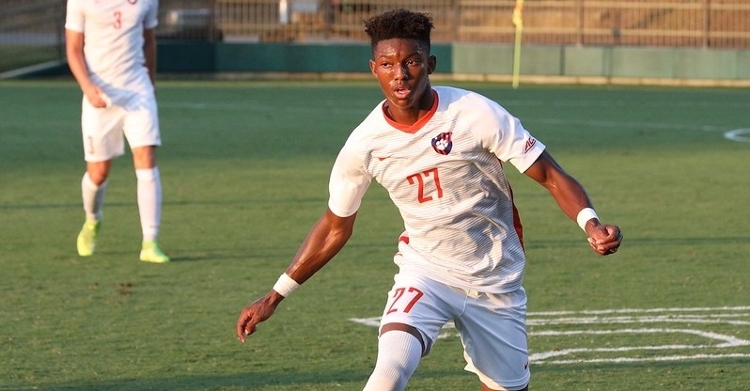 Mt. Pleasant, S.C. – The sixth-ranked Clemson men’s soccer team moved to 9-1 on the season following a commanding 3-0 win against the College of Charleston on Tuesday night. Mohamed Seye opened his scoring account at Clemson with two goals in the match, while Kimarni Smith netted his 11th goal of the season.

“I was proud of the team. I thought it was a professional performance and the team went about what they needed to do against a difficult opponent,” said Head Coach Mike Noonan after the victory. “We’re getting forwards to score and defenders to do their job.”

Clemson opened play with 20 minutes of consistent possession and pressure, showcasing precise passing and creating numerous opportunities in the attacking third. The opening spell of play would become a theme throughout the night, as the Tigers dominated all aspects of the match.

In the 21st minute, Seye broke the deadlock by hitting a beautiful strike with his left foot to send the ball past the Cougars’ dumbfounded goalie. The goal from Seye made him the 14th Clemson player to find the back of the net this season.

In the 30th minute, Noonan sent on a group of substitutes and saw an immediate impact as a result of the changes. Tanner Dieterich and Smith saw two minutes of action before combining with Grayson Barber to extend the Tigers’ lead. A beautiful pass from Dieterich to Barber allowed for Smith to slip behind the defense and net his lone goal on the night. The score by Smith added to his nation-leading total, while the assist gave Dieterich seven on the year, moving him into a tie for second in the country for total assists.

The second half saw no change in the Tigers’ dominance. The attacking front stayed potent as the team logged nine shots in the second 45 minutes, contributing to a total of 17 on the night.

The Tigers’ lone goal in the second half gave Seye his second of the night. After a precise delivery from a Felipe Fernandez corner kick, Seye rose above the Cougars’ defense and slotted home the third goal of the match. The goal came in the 55th minute and gave Fernandez his second assist of the year.

George Marks played a full match in goal and was not called on to make a save in the 90 minutes. The shut-out was the sophomore’s fourth of the season.

Clemson had 21 players see action during the match, with 19 playing double-digit minutes. Noonan reflected on the team’s depth by saying, “We have great competition for places on our team. We talk a lot about how when the subs come into the game the energy can’t drop. We played at a really high level for the entirety of the match tonight.”

The Tigers now look ahead to an ACC clash against No. 22 Virginia Tech at Historic Riggs Field on Saturday, Oct. 5th. The game against the Hokies is slated to start at 7:05 p.m., with gates opening an hour prior. Those not able to attend Saturday’s contest will be able to view it via ACCNX.