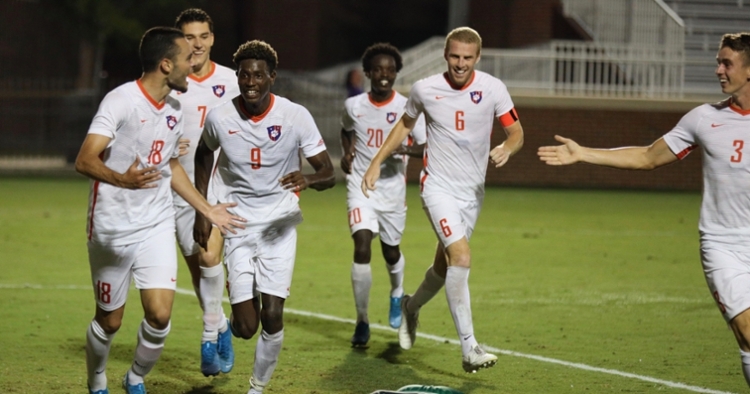 Clemson, S.C. – The No. 7 Clemson men’s soccer team won over the Fordham Rams by a 3-2 score line on Tuesday night. The match was highlighted by Alvaro Gomez’s game-winning goal in the 100th minute of play with a lethal shot from 20 yards out, beating the Ram’s keeper to the bottom left corner of the net. Robbie Robinson was responsible for the Tigers’ first two goals of the game, bringing his season tally to seven, joining teammate Kimarni Smith at the top of the team’s leaderboard.

“Every win is a good win,” said Head Coach Mike Noonan after the match. “The one goal games build character in teams. Fordham scored the first goal against us and we came back. We made mistakes and it cost us, but we controlled the game. It was a difficult game, but I am happy with it.”

The opening 23 minutes of play were slow for both sides, as the teams searched for a breakthrough moment to assert themselves as the controllers of the match. With 23 minutes off the clock, Fordham took the lead off of a header from a cross-field pass. Four subs immediately entered the game for the Tigers and caused Clemson to firmly grasp control of the playing field.

Robbie Robinson was one of the four substitutes to enter in the 23rd minute, and 10 minutes later he netted his first of the game to draw the Tigers even at 1-1. Four minutes later, a flurry of precise footwork and expert finishing from Robinson allowed for the Tigers to take the lead heading into the half.

The second half of the game saw Clemson play to the standard which they had set in their opening five matches. However, a late own goal by the Tigers drew the match level at 2-2 with 15 minutes to go. A cluster of chances ensued for Clemson as they attempted to net the winning goal before entering into overtime. To no avail, Clemson and Fordham ended 90 minutes of play in a 2-2 deadlock.

Overtime saw Clemson control from start to finish. Clemson scored what was believed to be the game-winning goal midway through the overtime period, but an offsides call from the sideline official disallowed the score. With 22 seconds left in the period, the Clemson offense mounted one final attack to try and end the match, and a perfectly placed pass from Grayson Barber to Alvaro Gomez provided the winning score.

In net for the Tigers was Daniel Kuzemka, earning his first start and second appearance of the year. Kuzemka played the full match for his side, logging two saves on four shots.

Earlier in the day, Clemson was picked as the number seven team in the country by the United Soccer Coaches poll. The ranking was a six-spot improvement off of their ranking from just a week ago.

The Tigers now look ahead to Friday night, as they partake in the final double-header of the season with Clemson women’s soccer. The men will kick-off ACC play as they host Duke under the lights of Historic Riggs Field. The game will begin at 8:00 p.m. with live coverage on ACCNX.

Some of our favorite ??’s from last night’s 3??-2?? WIN over Fordham!#ClemsonUnited pic.twitter.com/M0M1OBrLgp