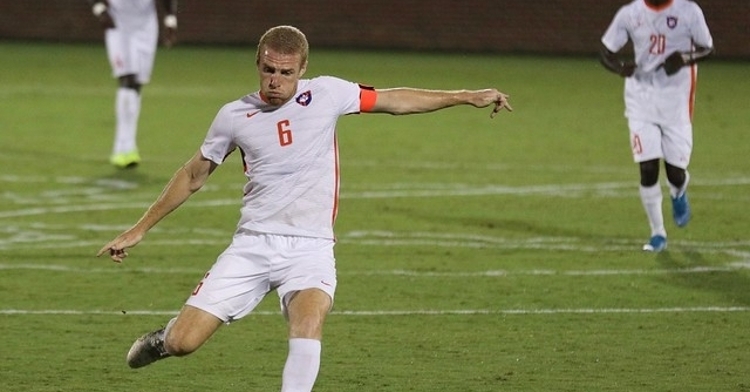 Clemson, S.C. – On a night where Clemson honored the 1984 National Championship men's soccer team, the 2019 squad played like champions in front of 2,500 Clemson faithful, defeating No. 15 Duke by a 3-1 margin. Behind goals from three different players, and an inspired performance by freshman Phillip Mayaka in the midfield, the Tigers start 7-0 for the first time since 2006.

“The team is staying present in the moment and they want to keep getting better. They are not satisfied”, Head Coach Mike Noonan said when reflecting on this year’s team. “The crowd here gives a special feeling. Our crowd is our 12th man and 13th guy, it’s a great time for Clemson athletics. I’ve been smiling since the first day of preseason.”

The first 25 minutes of the match saw the Tigers engaged in a physical battle, exchanging possession in the midfield with the Blue Devils, as both battled for control and the ability to manage the tempo of the match. The Tigers saw a flurry of opportunities be stopped by Duke’s Will Pulisic in goal, as the senior netminder stopped six shots during the first half and 11 on the night.

A beautiful crossing ball from Justin Malou in the 25th minute allowed for James Brighton to slot away the game’s first goal with his head, giving the Tigers the 1-0 lead and control of the match’s tempo heading into halftime.

The second half saw the two teams engage in a high-octane contest, both trading spells of possession in the midfield as time ticked on. Clemson extended their lead in the 63rd minute, with Grayson Barber tallying his fifth goal of the year after a scramble in the box allowed a loose ball to find Barber’s feet. Clemson’s two goals ensured the squad their seventh consecutive multi-goal game this year.

A series of scrappy possession in the 65th minute saw each side lose one player to a red card decision, causing the final 25 minutes to be played with 10 men representing each side.

The final goal of the match came 14 seconds after Duke cut the Tigers’ lead to one goal, with Kimarni Smith showing skill and poise as he took on three Blue Devil defenders and slotted the ball past the Duke goalkeeper.

George Marks played a full 90 minutes in net and earned his fourth win of the season, contributing one save, as Duke only managed two shots on goal.

The No. 7 Clemson men’s team now looks ahead to a Tuesday night match at Furman University, with the opportunity for Head Coach Mike Noonan to earn his 100th win at the helm in Clemson. The match at Furman will be the first of three away games for Clemson, with Wake Forest and College of Charleston awaiting after the contest in Greenville, S.C. The next home match at Historic Riggs Field will be against Virginia Tech on Saturday, Oct. 5th.

What an honor to recognize the 1984 @ClemsonMSoccer Championship Team tonight. ??