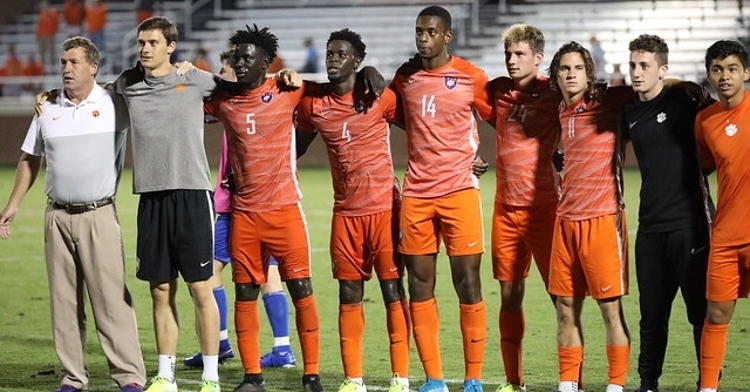 Winston-Salem, N.C. – The Clemson men’s soccer team fell for the first time this season, losing in overtime by a 2-3 margin against the Wake Forest Demon Deacons. A penalty-kick in the 92nd minute gave the Demon Deacons the victory.

“I thought we played really well tonight”, said Head Coach Mike Noonan. “We needed to finish our chances in the second half of the match, but I was extremely proud of the way we played.”

The Tigers struck first in the contest, with Kimarni Smith netting a beautiful goal in the 42nd minute to give Clemson a 1-0 lead. Smith used a curling shot from 25 yards out to beat the opposing goalkeeper to the far side of the net. The Tigers ended the first half with all the momentum, as the team used a mixture of poise and prowess in the attacking third to control the opening 45 minutes.

The second half saw Wake Forest get off to a quick start, with the Demon Deacons tying the match at 1-1 in the 50th minute. The Tigers got back on top 13 minutes later, as Oskar Agren netted his first goal as a Clemson Tiger off of a deflected saved by Wake Forest’s goalkeeper.

The Tigers used the newfound momentum to control the pace of play, until a free kick allowed the Demon Deacons to draw level at 2-2 in the 85th minute. Each team created a flurry of opportunities over the final five minutes to try and win the match in regulation, but after 90 minutes of play the game remained knotted at 2-2.

Two minutes into overtime, a Wake Forest attack inside the 18-yard box ended in a penalty kick being awarded to the home side. Wake Forest converted the opportunity to win 3-2.

Clemson now looks forward to a mid-week match at the College of Charleston on Tuesday, Oct. 1. The match against the Cougars will be the final contest in a three-game road trip for the Tigers. Clemson will then return home for an ACC match against Virginia Tech on Saturday, Oct. 5. Both contests are slated to start at 7 p.m.