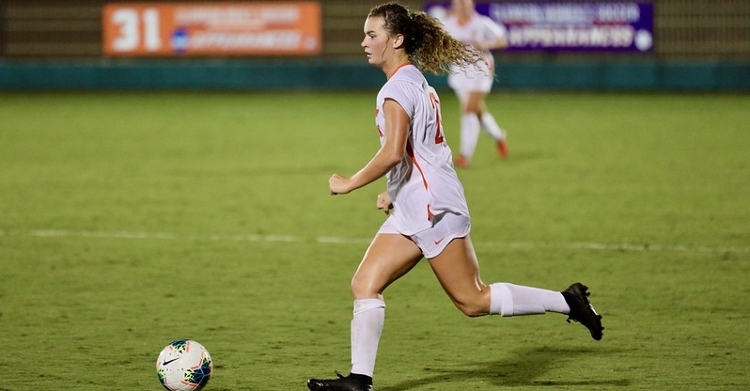 The No. 22 Clemson women’s soccer team closed out their regular season schedule with a 2-1 win over the Boston College Eagles in Chestnut Hills, Mass. With the win, the Tigers secure a place in next week’s ACC Championship. The Tigers close out the regular season with an 11-5-1 record with a 5-5 mark in conference play.

In the final seconds of the first half, Kimber Haley rushed up the right side of the field before firing a long shot on net from outside of the box. The ball would soar off the crossbar and send both teams into half without a goal.

Despite Clemson controlling most of the game, the Eagles struck gold first with a goal in the 52nd minute. However, the Tigers quickly landed a corner opportunity in the 57th minute that led to a goal line shot by Hal Hershfelt and the eventual rebound goal by Mackenzie Smith. The equalizing goal by Smith would be her third of the year, moving her season points total to eight and setting a personal career high for points in a season.

After a previous chance in the game, Hal Hershfelt found a goal of her own in the 71st minute to put the Tigers on top. After a short pass from Kimber Haley, Hershfelt walked her way deep into the box before sending a shot into the lower right corner of the net. It marked the second straight game Hershfelt netted the game-winning-goal.

“This year we have had to battle through adversity which paid dividends tonight. To fall behind and respond back with two goals in the second half shows what this team is made out of. We are excited to be back in the ACC Tournament again.”

Thursday night is home to multiple other regular season finale games across the league which will finalize the bracket. The top-eight teams from the conference will qualify for the ACC Championship with the quarterfinals being held at campus sites on November 3. The semifinals and final will be held at WakeMed Soccer Park in Cary, N.C. on Friday, November 8 and Sunday, November 10, respectively.