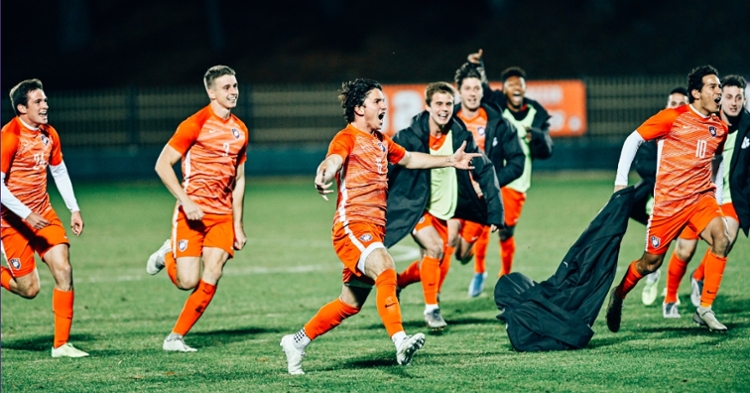 Clemson, S.C. – The second-ranked Clemson men’s soccer team will host the Providence Friars on Sunday night under the lights of Historic Riggs Field in NCAA Third Round action. The match marks the fifth time in the past eight seasons that the Tigers have advanced to the third round of the tournament. Clemson enters the match with an undefeated record while playing at home this season, winning 12 of the 13 matches it has hosted and only drawing once.

· The Tigers enter the match holding the second seed in the NCAA Tournament and are ranked third in the United Soccer Coaches poll.

· Sunday will be Head Coach Mike Noonan’s 14th match in the NCAA tournament at the helm of Clemson’s program.

· The Tigers are 51-25-7 in the NCAA tournament. Of the seven draws which the Tigers have had, Clemson has advanced out of three of the matches.

· The Tigers improved to 24-4-2 in the second round of the tournament with its victory over Charlotte last Sunday.

· Last time out, the second-seeded Clemson Tigers defeated the Charlotte 49ers, 2-1. The 49ers entered the game ranked #22 in RPI and #15 by United Soccer Coaches. The match saw Robbie Robinson and Grayson Barber score for the Tigers.

· Clemson’s 67 goals remain the most by a team in the NCAA this season. The team’s average of 3.35 goals per game gives Clemson the most potent scoring offense rating in the nation.

· Clemson is making its sixth appearance in the NCAA tournament in the past seven seasons.

· Clemson is led in scoring and points by Robbie Robinson, with 16 goals and 41 points on the year thus far.

· Clemson is led in assists by Tanner Dieterich. Dieterich, with 10 assists, is the lone player for Clemson to have double-digit assists this season.

· Clemson is undefeated at home this season, holding a 12-0-1 record through the team’s opening 13 matches.

· The captains for the 2019 team are Tanner Dieterich, Nolan Lennon and Malick Mbaye.

· Providence is making its 10th appearance in the NCAA Tournament in 2019.

· Providence is led by Head Coach Craig Stewart. Stewart is in his eighth season at the helm of Providence’s program.

· Providence advanced to the third round after upsetting #15 Penn State, 3-2, in overtime.