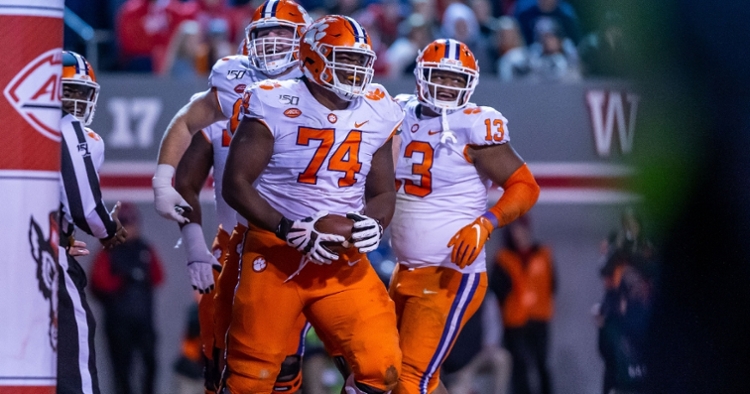 Former Clemson offensive guard John Simpson was selected with the 109th overall pick in the fourth round by the Raiders Saturday.

He is a second Clemson selection this draft by the Raiders, after going with Tanner Muse at No. 100 last night. He is a fifth ACC Tigers pick in the last two drafts after taking Clelin Ferrell, Trayvon Mullen and Hunter Renfrow last year.

The Raiders traded up 12 spots with Detroit to pick Simpson. He is a fifth Tiger selected in the 2020 draft so far, after Muse, Isaiah Simmons (8th; Arizona), AJ Terrell (16th; Atlanta) and Tee Higgins (33rd; Cincinnati).

Simpson earned consensus first-team All-America honors and earned ACC offensive lineman of the week three times as a senior, also a semifinalist for the Outland Trophy.

He started 29 of his 50 games as a Tiger and played 2,043 snaps. Simpson also scored his first career touchdown at any level out of the Clemson ‘Fridge’ package in the division-clincher over NC State this past season.

Simpson was rated as the No. 9 offensive guard prospect by ESPN.

He is projected a $797K signing bonus and a $3.4 million contract total, per Spotrac.

Clemson coaches weigh in on Simpson (via Clemson)

HEAD COACH DABO SWINNEY: “John Simpson was a captain and a graduate and is as good of an offensive lineman as we’ve had come through Clemson—going on 18 years, my 18th season—as good an offensive lineman as I’ve seen here. He’s ready-made. He’s what everybody’s looking for at the next level. He’s got all the measurables that everybody’s looking for as far as the strength, size, athleticism, flexibility and power. He’s been a great player for us. He’s played against the best of the best. I’m excited about his continued development at the next level.”

OFFENSIVE LINE COACH ROBBIE CALDWELL: “John Simpson is a big guy and mighty powerful. He brings an athleticism to the Raiders that is very special for a guy his size. I think he’s going to help the Raiders in the run and the pass game.”

With the 109th pick in the #NFLDraft

The @Raiders select John Simpson out of @ClemsonFB pic.twitter.com/Tw3wuTkE6K

John Simpson will be blocking for the @Raiders in Clemson West! ????#NFLDraft #ACCFootball pic.twitter.com/Ka3p1R5ORA

John Simpson - my third rated guard behind Robert Hunt and Damien Lewis. Carried a third round grade on my board.