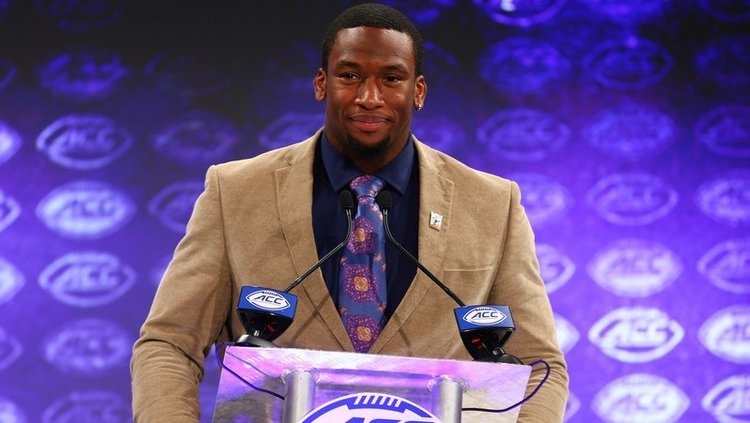 The selection matches the highest-ever for a Clemson product, joining Sammy Watkins (2014), Gaines Adams (2007) and Banks McFadden (1939). He combined with Christian Wilkins (No. 13 overall to Miami) and Dexter Lawrence (No. 17 to New York Giants)) to set a school record for first-round picks.

Ferrell was rated as high as the No. 17 player overall and the No. 5 edge defender by CBS Sports with projections in the mid-teens of the first round. Instead, Ferrell is projected a $31.3 million contract with a $21.6 million signing bonus per Spotrac.

"This might be a surprise to a lot of people seeing Clelin Ferrell go this high," NFL Network analyst Daniel Jeremiah said. "But he's a very productive football player. A power rusher with plenty of effort...He's played big on the big stage...Guys, I'll tell you this. I did my homework and talked to all these scouts. I talked to his high school coach, talked to his college coach and teammates - he had the highest character of anybody I spoke to in this draft.

"And (Raiders GM) Mike Mayock said in his first press conference that we (Raiders) need foundational players. This is a foundational-type player. People will say it's too early but I think is a safe pick right in the middle of the fairway."

The Hendricks Award winner, awarded to the nation’s top defensive end, was a two-time first-team All-American.

The Richmond, Virginia native totaled 166 stops, 50 for loss, with 27 sacks over 44 starts with the Tigers.

He will be coached by former Tigers defensive lineman Brentson Buckner on the Raiders D-line.

New Raiders DE Clelin Ferrell shares Clemson alma mater with D-like coach Brentson Buckner. “To tell you the truth, I didn’t know if Coach Buckner liked me throughout the process. ... I love what he’s about. I can’t wait to get started.”

Clelin Ferrell's 89.7 pass-rush grade capped a three-year rise at Clemson last season – and he heads to Oakland to join the Raiders! #NFLDraft pic.twitter.com/wFibxoxBnh

Leave it to the Raiders to upset the apple cart. But: Clelin Ferrell was the most productive of all the studs on the Clemson D-line this past season.

With the 4th pick in the 2019 #NFLDraft, we have selected Clelin Ferrell from @ClemsonFB. pic.twitter.com/QUPkpsj8Rt

Who is @Raiders_PR getting in Clelin Ferrell? The inaugural recipient of the Tim Bourret Award, given to the Clemson player who best represented himself, his teammates and Clemson University in the media. As our reporters will attest, he will be an instant favorite on the beat. pic.twitter.com/YOmjgRJvG4

We love you, Cle! Congratulations!!!

Clelin Ferrell has generated over 39,000 social media mentions since being selected 4th overall, per @ClemsonSMLC pic.twitter.com/2hltDMVBnd

Here’s the thing about Clelin Ferrell to the #Raiders. If Mayock had been in his old job, telling us how much he liked Ferrell for the last couple months, everyone would think the team that took him at 4 was brilliant. ???????

New Raiders DE Clelin Ferrell said not running 40 at combine “was the toughest call I had to make.” Skipped workout due to turf toe. “I’m healthy. ... I’m so excited to get started.” Did indicate he might be held out in early activities this spring as precaution.

Raiders DE Clelin Ferrell on draft-day call from team at No. 4: “I cried like a baby.” He thinks Jon Gruden couldn’t understand what he was trying to say. “Just a lot of emotion.”

New Raiders DE Clelin Ferrell on being chosen No. 4 overall: “Man, I’d be lying to you if I said I wasn’t surprised. This was a really, really long process. I don’t pay attention to mock drafts. Those things are stupid.” But always felt he’d be a Raider. Had “easy” connection.

The moment Clelin Ferrell heard his name called at No. 4 overall.

Talked to Mike Mayock on the field before the national championship game in Santa Clara. Said he loves getting an in-person look at college prospects. Has taken two of them from that night in Clemson DE Clelin Ferrell and Alabama RB Josh Jacobs.

Saw Mike Mayock on the field before the National Championship game. He said there was so much talent at Clemson and ‘Bama that any GM would get a strong grade if they drafted players from that game. So far, Clelin Ferrell and Josh Jacobs in Round 1.

Clemson coach Dabo Swinney in Nashville on Raiders pick Clelin Ferrell: “They got an unbelievable, committed grinder, one of the most low-maintenance, humble superstar type players you would ever want to coach. Clelin will be there tomorrow, ready to work. I promise you.” #RJnow