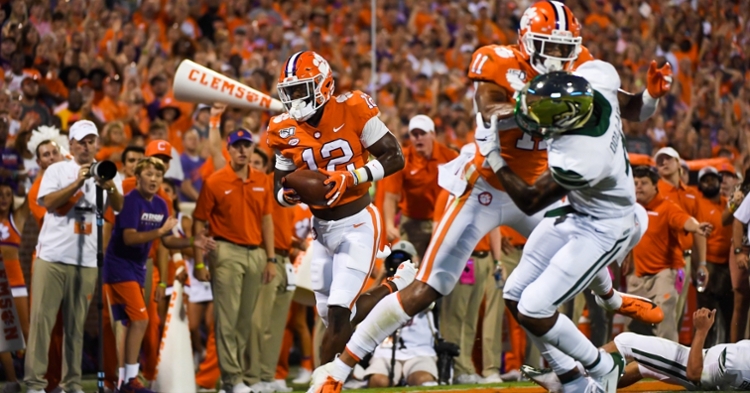 Former Clemson defensive back K'Von Wallace was selected with the 127th overall pick in the fourth round by the Philadelphia Eagles Saturday.

"He is another of those new-breed safeties who can play in the back-end as a strong safety and really does his best work in the box as a nickel and dime type of corner," ESPN's Mel Kiper Jr. said of Wallace. "He's a guy who has tremendous instincts and very good with route recognition and is very comfortable down there. He can be used as a blitzer and he's a strong tackler. He has good play-entry points both against the run and the pass...Wish he was a little bit faster, and if he was, he would've gone a lot higher in this draft because he can play so many positions.

"Think about what Xavier McKinney did at Alabama, he did the same thing at Clemson and did it at a very high level."

The Highland Springs, Virginia product was a third-team All-ACC selection last season after totaling 81 stops (three for loss), 10 pass breakups, two sacks and two interceptions (one for a TD).

Wallace was rated the No. 8 safety by CBS Sports and the No. 10 safety by ESPN.

He is projected a $706K signing bonus and a $3.3 million contract overall, per Spotrac.

With Clemson's entire starting defense from its 2018 national championship squad now having now completed their college careers, let's take a look at that unit through the lens of the NFL Draft. pic.twitter.com/H4oz6yhefd

Clemson coaches weigh in on Wallace pick (Via Clemson)

SAFETIES COACH MICKEY CONN: “K’Von Wallace is a highly motivated football player. He’s smart and very instinctive player. He can play multiple positions. He can play safety, he can play nickel, he can play corner, and he plays them all really well. He is extremely determined to succeed. He will learn the playbook and he will get the job done; he’ll learn it early too because he’s extremely smart. He’ll be great on special teams, and he’ll make a huge impact. He’s a very unselfish player and willing to take on whatever role is best for the team. He’s a great team player and pulls for his teammates. He’s a very, very unselfish person and a winner, and that’s what they’re getting in taking K’Von Wallace.”

Became the Eagles’ 12th selection from Clemson all-time and Philadelphia’s first since selecting DE Ricky Sapp in the fifth round of the 2010 NFL Draft.

They don’t know what they just did to me.

K'Von Wallace was the 49th player on my board. Outstanding pick by the Eagles