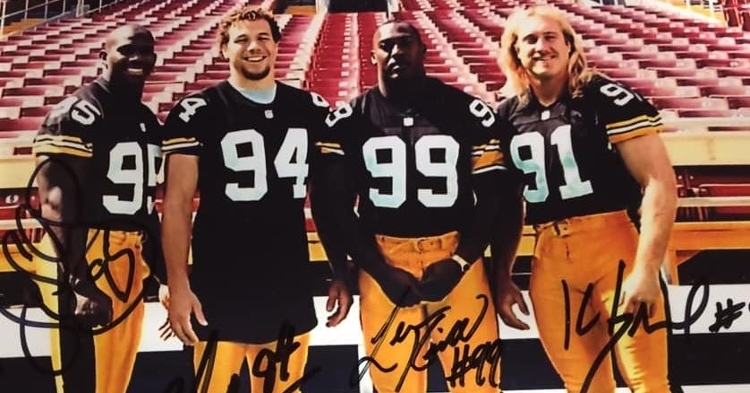 Clemson great Levon Kirkland had a tremendous NFL career mainly with the Pittsburgh Steelers from 1992-2000.

He shared with us a heartfelt letter he wrote to three of his linebacker teammates Greg Lloyd, Kevin Greene, and Chad Borwn.

A thank you letter to one of the best linebackers crew ever! My boys.

The dictionary explains that a brother is a male having the same parents as another or one parent in common. The second defintion states: "One who shares a common allegiance, character, or purpose with another or others, better known as breth-ren (breth'ren). "I'm so blessed to have the three of you guys as my breth-ren.

The three years we played together in Pittsburgh will never leave my heart nor my soul. I still remember being in our defensive huddle. Kevin on my right, Greg on my left, Chad behind the defensive line and me in front, relaying the defensive calls. We were a formidable group of linebackers. As our defensive coordinator, Dick LeBeau would say, "They are tough to deal with for any offensive team." As individuals, we were all good players, bringing our own unique style to the game, but together there was nothing like "The Blitzburgh Defense." We had attitude, size, quickness, and adeptness. In the mid 1990s, we were the terrors of the NFL.

Greg (Lloyd) - Out of all the Dawgs we had on that defense, you were the Alpha - The Real Deal, Just Plain Nasty! You brought a certain attitude and intensity that was overflowing. We all had to play to your standards. I never withnessed any football player like you. Your heart and willpower was incredible. Your everyday work ethic was off the chart and I played to make you proud and not get on your bad list. What I do know that others may not know is that you have a wonderful heart. Those Tuesday visits to the Children's hospital were nice gestures. You demanded us to go with you but it was worth it. When I lost my wife, you were there for me. You listened to me and encouraged me that I wasn't alone. I will never forget that moment. You're the man in my book and belong in the Hall of Fame. Thank you, G. Lloyd !

Kevin (Greene) - Mr. Hall of Famer. I remember your arrival to Pittsburgh in 1993. You were already an establish superstar and I know you would be a big boost to our team. While the Pittsburgh Steelers gained a Hall of Famer, I gained a life long friend. I enjoyed our pranks on the offense and I was always down for your tomfoolery. Our relationship is strong as ever and your texts to me always end with "I love you, LK.” You better believe that I love you too. Thanks for your friendship, and blessing me with your presence.

Chad (Brown) - My tag team partner. "Power and Glory!" Probably not a great nickname but much better than " Snake and Bake." I often tell people that you and I had the best working relationship. We grew together as linebacker because that first year being starters we had no clue. Remember the meeting with Coach Cowher and Marvin Lewis? LOL! After the trials and tribulations, we became an awesome duo. We both made the Pro-Bowl the same year and I thought we were going to wreak havoc on the NFL for years. I still hated that you left the next year but I understood. I'm so happy that we remained "boys," throughout the years. I'm so proud of you and know that my friendship knows no limit. Thank you, Chad.

My breth-ren, know that the Big Backer loves all of you. I'm still looking forward to our dinner. KG, you're going to pay for it because you're the Hall of Famer. With Great Power comes Great Big Pockets. I love you guys.