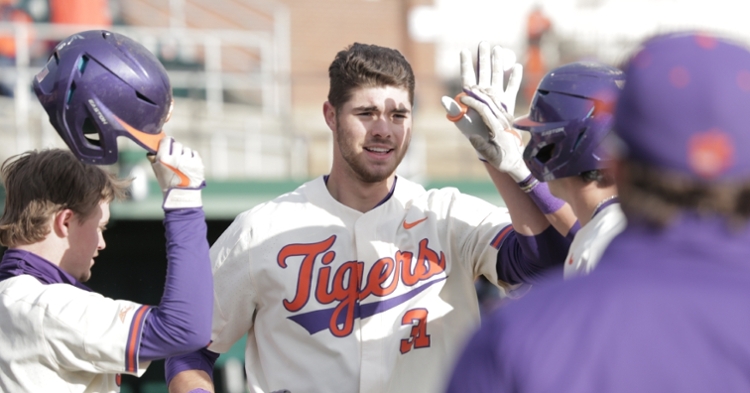 CLEMSON, S.C. - Freshman Caden Grice hit the first two home runs of his career, including a two-run homer in the sixth inning to give Clemson the lead, in the Tigers' 7-3 victory over East Tennessee State at Doug Kingsmore Stadium on Tuesday afternoon. The Tigers improved to 4-2, while the Buccaneers fell to 5-3.

Grice blasted a long solo homer to right-center, the first of his career, in the third inning. After the Buccaneers tied the score in the fourth inning, Ethan Cady belted a two-run homer in the top of the fifth inning. Freshman Max Wagner blasted a solo homer, the first hit of his career, in the bottom of the fifth inning to narrow their lead to 3-2.

Grice crushed another long home run, this time a two-run long ball and his second of the game, in the sixth inning to give Clemson a 4-3 lead. Regan Reid, who was making his first career start, added a two-run double in the seventh inning, then Dylan Brewer grounded a run-scoring single in the eighth inning.

Nick Clayton (1-0) earned the win in relief, as he struck out five in 2.1 innings pitched. Six Tiger pitchers combined for 17 strikeouts in the game. Daulton Montagna (0-1) suffered the loss.

The Tigers open ACC play with a three-game home series against Notre Dame this weekend, starting Friday at 4 p.m. on ACCNX.

The first of his career! @CadenGrice3

After Meredith doubles & Parker is walked intentionally, @ReganReid11 rips this two-run double to extend the Tigers' lead in the seventh inning! ??