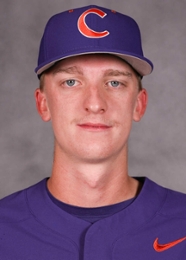 RH Pitcher
B I O
Righthander who was one of Clemson’s top relievers in 2020.
2020: Received a redshirt from the NCAA with the season’s suspension on March 12 and cancellation due to a coronavirus (COVID-19) pandemic … had a 1-0 record, one save and an 0.00 ERA in six relief appearances … in 8.2 innings pitched, he allowed four hits (.143 opponents’ batting average), no homers and four walks with eight strikeouts … did not allow a steal in four attempts … did not allow an extra-base hit … only allowed two of his nine inherited baserunners to score … held lefthanded batters to 0-for-12 with one walk and four strikeouts … held opponents to 1-for-15 (.067) with runners on base, 1-for-10 with runners in scoring position and 0-for-9 with two outs … pitched 2.0 innings in relief, allowing one hit and no runs with two strikeouts to record the save against Liberty on Feb. 15; was his first career appearance … pitched 2.0 innings in relief, allowing two hits, no runs and no walks with three strikeouts to earn his first career win against Stony Brook on Feb. 22 … pitched 2.1 innings in relief, allowing no hits and no earned runs with one strikeout against Winthrop on March 11 … No. 36 freshman in the nation in the preseason by Perfect Game … No. 8 freshman in the ACC in the preseason by Perfect Game.
Before Clemson: All-state selection … region pitcher-of-the-year … team MVP … lettered four times in baseball at York Comprehensive High School, where he was coached by Eddie Tisdale and Tripper Crisson.
Personal: His cousins, Chad and Drew, played baseball at USC Lancaster … majoring in parks, recreation & tourism management … born Nicholas Bryant Clayton on April 10, 2001 in York, S.C. •
Favorite hobbies – Golfing, hunting and hanging out with friends•
One fact that most people don’t know – Used to play the piano at a young age•
Favorite food or candy – Bacon-wrapped duck and sour punch straws•
Ideal vacation spot – Australia•
Childhood hero – His father•
One person, living or dead, to eat dinner with – LeBron James

How about a dose of reality?