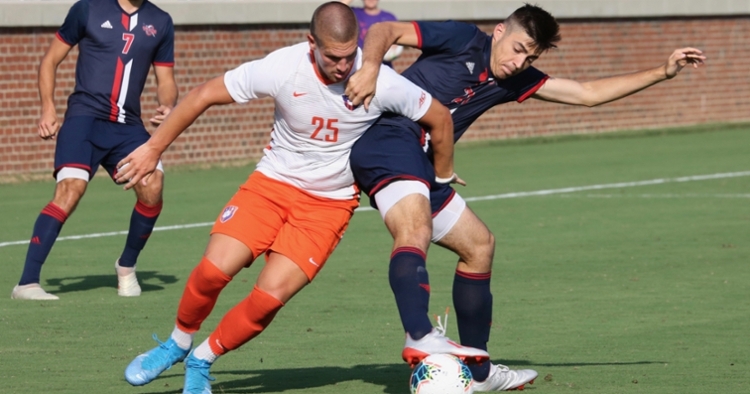 Clemson, S.C.– The Clemson Tigers saw eight players score in their match Monday night against Detroit Mercy, winning the contest against the first-time opponent, 8-0. The Tigers’ eight goals in a game is the most scored by the program since 2006, when the Tigers won over Georgia State by a score of 8-1. The result makes it the most goals scored by Noonan’s squad in a single game since he took to the helm. The goals came as a result of the Tigers shooting 26 shots, with 15 being on goal.

Clemson scored its first goal in the tenth minute of the match, as Adrian Nunez opened his account for the season by putting away a loose ball in the box. Malick Mbaye converted from the penalty spot in the 26th minute and was joined on the score sheet by Grayson Barber in the 28th minute. Barber registered his third goal of the season in Monday’s match.

“We talked to the team at halftime and gave them some small adjustments to make and they went out in the first five minutes and it was over,” said Head coach Mike Noonan. “You love to see a team respond, and it doesn’t make a difference who the team was, it is about keeping the Clemson standard.”

The second half saw the Tigers pounce on the Titans early, allowing 46 seconds to elapse from the clock before James Brighton found the back of the net. Within the next five minutes of play, Kimarni Smith and Robbie Robinson added to the Tigers’ tally, bringing the score to 6-0 by the 50th minute. The final goals of the game were added by Alvaro Gomez and Nate Hall.

“We have a little more in front of the goal than we did last year. The neat thing is that we are getting a lot of goals from a lot of different people,” said Noonan after the match when reflecting on his side’s attacking prowess.

James Brighton lead the way for the Tigers by contributing four points to the Tigers’ victory. Clemson tallied 24 points against the Titans. All three goalkeepers on the roster saw time on field, with George Marks getting the start. Nolan Lennon earned the second-half start and Daniel Kuzemka closed out the final 22 minutes.