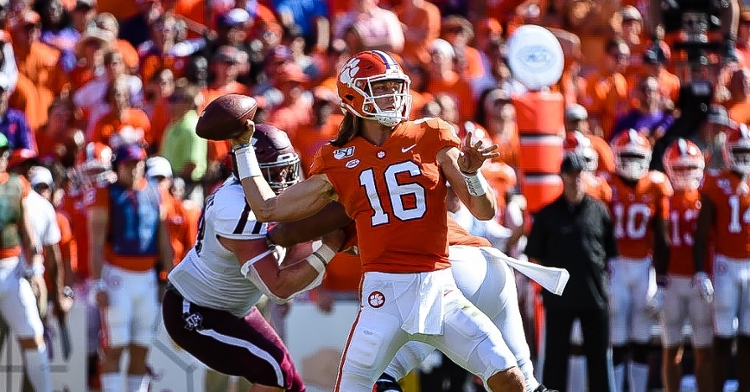 No. 1 Clemson cleared a major hurdle on its College Football Playoff path on Saturday.

The 24-10 win over No. 12 Texas A&M has the Tigers positioned better than any team nationally.

ESPN’s Playoff predictor gives Clemson an 84 percent chance of making the Playoff with 10 games to go in the regular season.

“Even that number feels conservative,” ESPN’s Heather Dinich wrote. “Sure, it's not easy to go undefeated, but it's easy to see why Clemson should: It might not play another ranked opponent the rest of the season. The Tigers next travel to Syracuse, which hours ago seemed like a trap game (again), but after Maryland manhandled the Orange on Saturday, there doesn't appear to be much of a spoiler lurking in the Atlantic Division.

“Maybe the road trip to North Carolina will surprise us. Maybe Louisville, which gave Notre Dame some headaches early, will learn how to finish. Maybe rival South Carolina will have something to say about it. Eh, probably not.”

All 14 ESPN CFP predictors have Clemson and Alabama in the Playoff again, with Oklahoma sharing the next-most agreement (12 of 14). Eleven of the 14 have the ACC Tigers finishing the season No. 1.