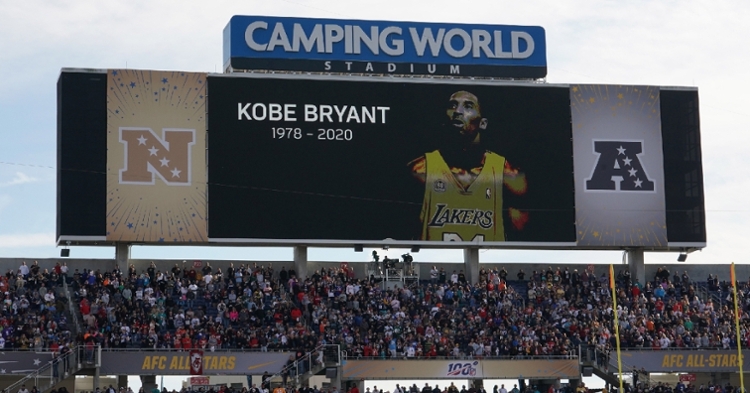 Kobe Bryant and his 13-year old daughter Gianna were among nine people killed in a helicopter crash on Sunday morning.

Houston Texans quarterback Deshaun Watson was interviewed about the tragic news at the Pro Bowl.

"It is heartbreaking, and for us to find out in the locker room before the game, a lot of guys were very emotional. Was able to know Kobe a couple of months ago. He came down to Houston and now the loss and his family. Prayers go out to his family and friends. It's terrible news."

The NBA commissioner released the following statement today regarding the passing of the Lakers legend.

"The NBA family is devastated by the tragic passing of Kobe Bryant and his daughter, Gianna.

"For 20 seasons, Kobe showed us what is possible when remarkable talent blends with an absolute devotion to winning. He was one of the most extraordinary players in the history of our game with accomplishments that are legendary: five NBA championships, an NBA MVP award, 18 All-Star selections, and two Olympic gold medals. But he will be remembered most for inspiring people around the world to pick up a basketball and complete to the very best of their ability. He was generous with the wisdom he acquired and saw it as his mission to share it with future generations of players, taking special delight in passing down his love of the game to Gianna.

"We send our heartfelt condolences to his wife, Vanessa, and their family, the Lakers organization, and the entire sports world."

The NBA world mourns the death of Kobe Bryant. pic.twitter.com/905rLfHnfi

We are devastated to learn of the passing of Kobe Bryant and his daughter Gianna. Our thoughts go out to all the families involved in the tragedy and everyone in the Lakers, Los Angeles and NBA communities. pic.twitter.com/NDcCDP0GtM

An emotional Doc Rivers addressed the loss of Kobe Bryant.

Michael Jordan on death of Kobe Bryant: “Words can’t describe the pain I’m feeling. I loved Kobe — he was like a little brother to me.” pic.twitter.com/r8JNMjfuRR

We are devastated by the tragic news that Kobe Bryant and his daughter Gianna have died in a helicopter accident.

Our thoughts are with the Bryant family and all those affected today. pic.twitter.com/MO5NuR1F5o

A large group of fans are in the plaza across from Staples Center to celebrate the life of Kobe Bryant. pic.twitter.com/jqUsikn2sT

Our thoughts and condolences are with his loved ones at this extremely difficult time ?? pic.twitter.com/1IDAGRqafS

Shaq reacts to the passing of Kobe Bryant. pic.twitter.com/0XQ7HXeM0O

"He inspired a whole generation."

Kareem Abdul-Jabbar reflects on the sudden passing of Kobe Bryant. (via @kaj33)pic.twitter.com/0ECuIbrr99

There’s no words to express the pain Im going through with this tragedy of loosing my neice Gigi & my brother @kobebryant I love u and u will be missed. My condolences goes out to the Bryant family and the families of the other passengers on board. IM SICK RIGHT NOW pic.twitter.com/pigHywq3c1

After scoring for PSG, Neymar flashed No. 24 to pay tribute to Kobe Bryant, who died Sunday morning in a helicopter crash. pic.twitter.com/EOrk3cZAUd

The Raptors and Spurs both took 24-second violations at the start of their game in honor of No. 24, Kobe Bryant.

The crowd gave a standing ovation along with Kobe chants. pic.twitter.com/C2VD5iZez9

He will not play tonight.

Kobe Bryant wrote a poem entitled 'Dear Basketball' when he retired in 2015.

In 2018 it won the Oscar for best short animated film.

These are his words, as read by an actor... pic.twitter.com/TZOUQmEdWb