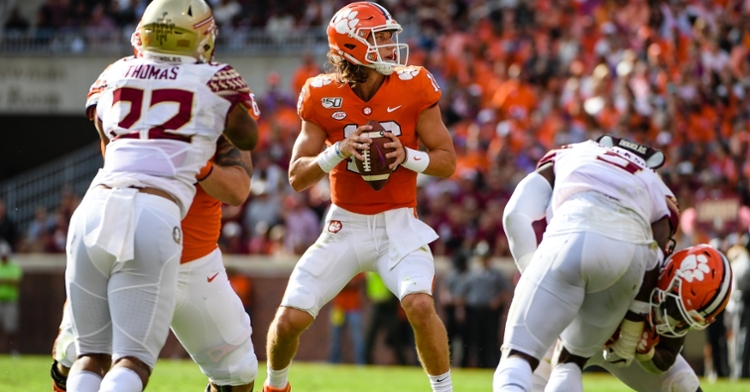 A group of seven unbeatens shrunk to five after a pair of undefeated teams squared off on Saturday.

Now the question is if one of those now beaten teams still has a shot to hang with the likes of the undefeated like Clemson moving forward.

Alabama, which didn’t do too well hanging with the Tigers in January, will now be speculated as sneaking its way back in the Playoff picture after a 46-41 home loss to LSU - starting with a potential No. 4 spot in Tuesday’s next CFP ranking per ESPN.

ESPN’s FiveThirtyEight sees the Crimson Tide as a longshot, with a 11 percent chance currently and a 20 percent shot if they can win out. That drops to three percent if Ohio State, LSU and Clemson run the table (over 99 percent CFP projections) and one-loss Oklahoma (65 percent) and Oregon (31 percent) do the same to win their conferences (six percent or lower if just Oklahoma or Oregon win out).

As it stands currently, Ohio State is given the top odds to win the national title (30), followed by Clemson (27) and LSU (17).

That trio has 100 percent of the votes from ESPN’s mock Playoff committee currently, with Alabama still drawing half of the votes (7 of 14) and a scattering of picks for Georgia (2), Oklahoma (2), Minnesota (2) and Oregon (1). LSU is a near consensus projected No. 1, then Ohio State and Clemson.

CBS Sports moved LSU to its No. 1 spot and a matchup with Oklahoma in the Peach Bowl, while continuing to project a Clemson-Ohio State Fiesta Bowl.