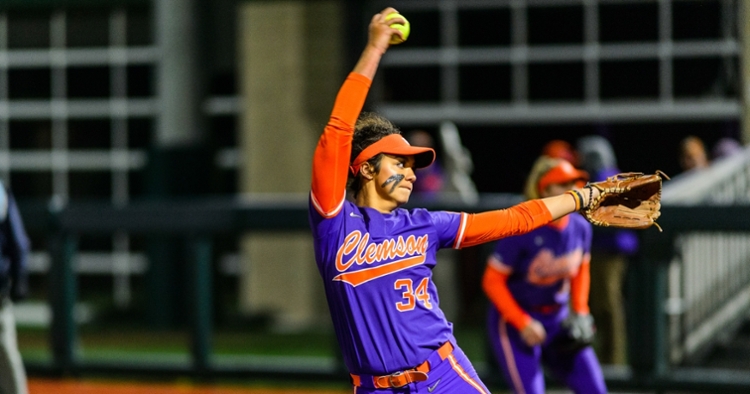 GREENSBORO, N.C. (theACC.com) – Clemson utility player Valerie Cagle has been selected as the ACC Softball Player of the Week, and teammate Logan Caymol has been named the Pitcher of the Week.

Cagle was stellar last week for the Tigers, helping her team to a 5-1 record, including a 4-0 mark in the Big Ten/ACC Challenge. The freshman from Yorktown, Virginia, posted a batting average of .500, racked up 13 RBI and led her team with four home runs. Cagle’s week was highlighted by a 4-for-5 (.800) effort at the plate in a 21-2 win over Maryland, including eight RBI, a three-run homer and a grand slam. Her grand slam was the second of the inning for the Tigers, making Clemson just the seventh team in NCAA Division I history to accomplish that feat.

Caymol went 4-0 in the circle, allowing just one run in 18 innings of work. A redshirt freshman from Buford, Georgia, the Tiger pitcher recorded a 0.39 ERA on the week while racking up 25 strikeouts. In a run-rule win over Western Carolina, Caymol threw a no-hitter as the game was shortened to five innings.