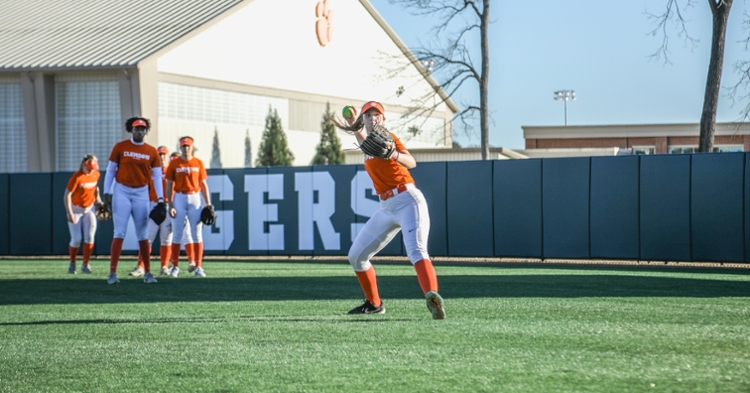 Clemson softball has one game left in Orlando with a 10 a.m. first pitch versus St. John's.

ORLANDO, Fla. – UCF dialed up eight hits and eight RBIs to defeat Clemson 8-0 in five innings Saturday afternoon at the UCF Softball Complex. With the win, the Knights improved to 3-0 on the season while Clemson fell to 1-3.

UCF took the lead after recording three hits in the bottom of the second, including a triple that grazed the third base chalk and rolled deep into the corner of left field. Later in the third, a Knights single up the middle scored two more runs before Clemson freshman right-handed pitcher Emma Whitfield stepped into the circle to relieve redshirt freshman Logan Caymol. With a pair of runners in scoring position, UCF capitalized on another hit up the middle to score two more runs before Clemson got out of the inning.

The Tigers’ freshman shortstop Hannah Goodwin recorded her third game with an extra-base hit as she doubled to right-center field in the second inning. With a UCF runner on first in the bottom of the fourth, junior third baseman Bailey Taylor orchestrated the program’s first-ever double play after a Knights batter lined out third and Taylor immediately threw back to first base before the runner could return safely.

Caymol, who secured the program’s first-ever win on Friday against St. John’s, fell to 1-1 on the season, while UCF’s Breanna Vasquez earned the win in the circle for the Knights.

Clemson also fell in its first game of the day versus Indiana, 5-4.

Up next, Clemson concludes its stint at the UCF Black & Gold tournament on Sunday as it takes on St. John’s in a rematch of the Tigers’ inaugural opener. First pitch is slated for 10 a.m.