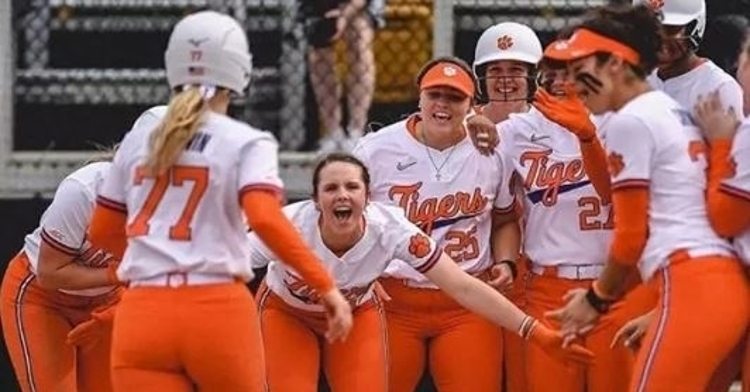 Clemson returns for its home opener at 2:30 p.m. on Wednesday. (Clemson athletics photo)

Clemson led 4-2 entering the bottom of the fourth, but the Red Storm scored four runs before the inning was over, and then three in the fifth, to take a 9-4 lead entering the sixth. Freshman Abi Stuart led off for the Tigers in the top of the sixth and – in her first career at-bat – homered to center field on the first pitch of the inning, which kick started the Tigers’ late-game run. Clemson scored two more runs in the top of the inning to cut the St. John’s lead to one. After a Red Storm single through the right side in the bottom of the sixth, Clemson Head Coach John Rittman, re-entered Cagle, who started the game for the Tigers, into the circle. With runners on first and second, St. John’s laid down a sacrifice bunt to advance both runners successfully, but Cagle forced back-to-back groundouts to end the inning with her team down two runs.

Left fielder Grace Mattimore, a transfer from Army West Point who joined the team in January, was also effective for the Tigers, going 2-for-3 on the day along with four RBIs.

Up next, Clemson is set for its inaugural home opener – a doubleheader against Western Carolina – on Wednesday, Feb. 12. First pitch is scheduled for 2:30 p.m. Wednesday’s matchup against the Catamounts is slated to be the first-ever softball game to air on ACC Network.

Yesterday, freshman Abi Stuart drilled two extra-base hits, including this double, in the final two innings of our comeback win over St. John’s ??

She also scored three of our 19 runs and posted two RBIs ?? pic.twitter.com/lTtj2ML7Lr