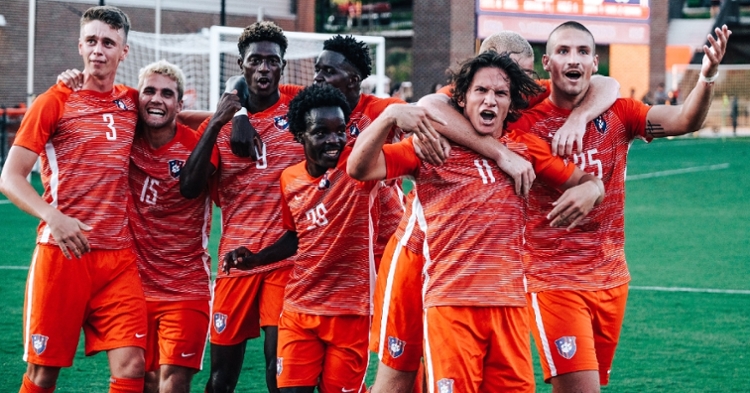 GREENSBORO, N.C. – The Clemson men’s soccer team has been named the preseason favorite to win the 2020 Atlantic Coast Conference Championship following a vote of the league’s 11 active head coaches. Clemson received five of the 11 first-place votes to win the 2020 championship.

With Clemson earning the top spot in the preseason poll, it marks the first time in the past five years that North Carolina has not been named the preseason favorite.

Clemson has also been voted to win the ACC’s South Region, while Virginia was tabbed as the favorite in the North Region.

“I like my team,” said Head Coach Mike Noonan. “However, we have a long way to go before we’re hanging banners and lifting trophies.”

Clemson earns the conference’s top spot after compiling an 18-2-2 record in 2019. The Tigers were crowned Atlantic Division and ACC Regular Season champions after earning a 6-1-1 record in regular season conference competition.

In addition to the team’s preseason accolades, senior forward Kimarni Smith has been named to the ACC’s 2020 Preseason Watch List. The honor comes after Smith was second on the team in goals and points during the 2019 season. Smith will be the conference’s top returner in both categories this year. Smith, originally from Nottingham, England, earned second-team All-American honors last season, along with being a first-team All-South Region and first-team All-ACC recipient.

Please refrain from coming to any Clemson sporting event if you feel sick or are experiencing symptoms of the coronavirus. All home matches at Historic Riggs Field during the 2020 season will be free for spectators, with a maximum capacity of 1,000 strictly enforced. All points of entry to Historic Riggs Field will be available.

There's a little bit of everything in our second episode of the #ClemsonUnited Vlog! pic.twitter.com/tdrTzCWl0X

Three of our matches have been given new kickoff times!#ClemsonUnited pic.twitter.com/9EOoUF7flZ