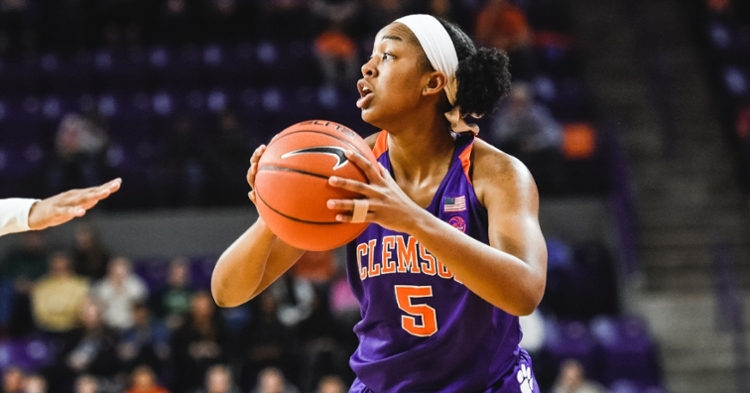 Robinson earned national freshman of the week at one point (Picture per Clemson athletics).

Greensboro, N.C. – Clemson women’s basketball’s Amari Robinson has been named to the Atlantic Coast Conference’s All-Freshman Team, it was announced today by the league office. Robinson is the Tigers’ first All-Freshman Team honoree since Kobi Thornton in 2017 (8th honoree in school history) and earned the honor from both the league’s head coaches and the Blue Ribbon Panel.

Robinson turned in an impressive freshman regular-season campaign for the Tigers, leading Clemson in rebounding (6.2 rebounds per game) and finishing second in scoring (10.6 points per game). In ACC play, Robinson is tied for the team lead in rebounds per game (5.6) and is third in scoring (9.8 ppg). The Douglasville, Ga., native has put up 15 double-figure scoring games for the Tigers this season, including two 20+ point outings. Robinson has played in 28 games this season (27 starts), missing just one game due to injury.

Earlier this season, Robinson was named the ACC Freshman of the Week, as well as the USBWA Tamika Catchings National Freshman of the Week after averaging 18.0 points, 9.0 rebounds, and shooting 20-23 from the free throw line in wins over Pittsburgh and Duke. In the overtime win over the Panthers, Robinson led with 20 points and pulled down nine rebounds, while finishing 12-of-13 from the charity stripe. Three days later, Robinson turned in a 16-point, nine-rebound performance, going 8-for-10 from the free throw line and guiding the Tigers to their first win over Duke in 24 tries.

Clemson is back in action on Wednesday evening, taking on Miami in the first round of the ACC Tournament. Tipoff is slated for 6:30 p.m. and will air on RSN.