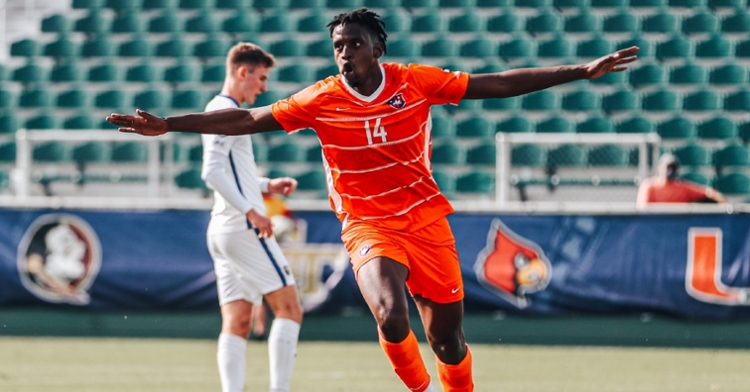 Mohamed Seye scores for the Tigers in the game’s 13th minute.

CARY, N.C. - Behind goals from Mohamed Seye and James Brighton, the No. 2 Clemson men’s soccer won its 15th ACC Championship on Sunday, 2-1, against the nation’s No. 1-ranked team, the Pittsburgh Panthers. The win marked Head Coach Mike Noonan’s second title of his tenure at Clemson and gave the Tigers their fourth ACC Tournament championship, second-most among current members of the conference and first since 2014.

In the game’s 13th minute, Seye snuck a ball past the Pitt goalie on an assist from Callum Johnson to get the Tigers on the board first. It was the 2,800th goal in program history and marked the first time the Panthers trailed in a game this season.

Pitt netted the equalizer just over a minute into the second half, before the teams played a tightly contested remainder of the game, combining for 21 fouls and four cards. In the 71st minute, Brighton’s 10th career goal gave the Tigers a 2-1 lead on an assist from Grayson Barber, who tied the ACC record for most assists in a tournament (4). In the 88th minute, Pitt’s Anas Amrani was awarded a red card, giving the Tigers the extra-man advantage for the remainder of the match.

George Marks earned the championship W in goal, making four saves. Clemson notched its fifth all-time win over Pitt and now holds an all-time record of 23-26-10 in the ACC Tournament.

Today’s match brings to a conclusion the 2020 fall season, as the NCAA Tournament is slated to take place following the 2021 spring season.

Kimarni Smith is our MVP ??

Congrats to all members of this year's All-Tournament Team! pic.twitter.com/qsrIWu3IBx