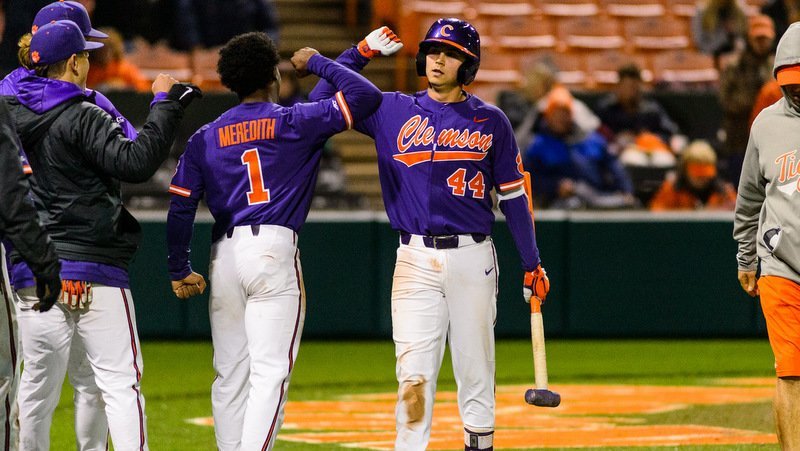 Bryar Hawkins was one of a number of Tigers to have a big day at the plate.

BLACKSBURG, VA. – Starting pitcher Mat Clark only allowed five base runners in six innings and every Clemson starter reached base at least once to lead the No. 15 Tigers to a 14-1 win over Virginia Tech.

The Clemson Tigers jumped on Virginia Tech starting pitcher Peyton Alford early and forced him out of the game before the end of the second inning.

After going down in order in the first inning, Grayson Byrd lead off the second with a walk and scored on a double to left-center field by Bryar Hawkins. Bo Majkowski followed with a double down the left field like to score Hawkins. Davis Sharpe hit the third consecutive double for the Tigers to score Majkowski. Bryce Teodosio laid down a bunt toward third base to advance Sharpe. This was the end of the day for Alford after only pitching 1.1 innings. Elijah Henderson welcomed relief pitcher Conner Yoder to the game with a single to left to plate Sharpe for the fourth run of the inning.

Virginia Tech got on the board first in the bottom of the fourth inning. Tanner Thomas hit a lead-off double and moved to third on a groundout from Nick Owens. Designated Hitter Dalton Harum stepped up and hit a deep fly ball to center field which allowed Thomas to tag up and score the Hokies first run.

Clemson answered with two more runs in the top of the fifth. Just like the second inning, Byrd led off the inning by getting on base, this time with a double to center field. Hawkins followed with a single to right, and Byrd scored on a fielding error by the shortstop off the bat of Majkowski. Sharpe was hit by a pitch to load the bases which allowed Teodosio to drive in a run with a sac fly to center field. Henderson followed with another fly ball, but Majkowski was thrown out at home attempting to tag up.

The Tigers put up seven runs in the top of the sixth to push the score to 13-1. Sam Hall walked and stole second. Kyle Wilkie followed up with his first hit of the day, an RBI double to left-center field. Jack Goonan came in to pitch for Virginia Tech and walked two straight batters before hitting a third and being relieved by Alex Havlicek. Sharpe stepped up with the bases loaded and hit a 2-RBI single to right field. Teodosio launched a 3-run homerun to deep left-center to conclude the scoring for the inning.

Clemson added another run in the seventh. Adam Hackenberg pinch hit for Wilkie and drew a walk. He came around the score on an RBI single from Majkowski to push the Tiger lead to 14-1.

The Hokies threatened in the bottom of the eighth, loading the bases with no outs against reliever Justin Wrobleski. He struck out Thomas and got pinch-hitter Alex Haymaker to line in to a double play to end the inning.

Wrobleski pitched the last two innings, giving up one hit and striking out four.

Sharpe and Majkowski both had three RBI’s, while Teodosio had four.

Clemson took the series and will go for a sweep when Keyshawn Askew takes the mound tomorrow at 1 p.m. on ACC Network.