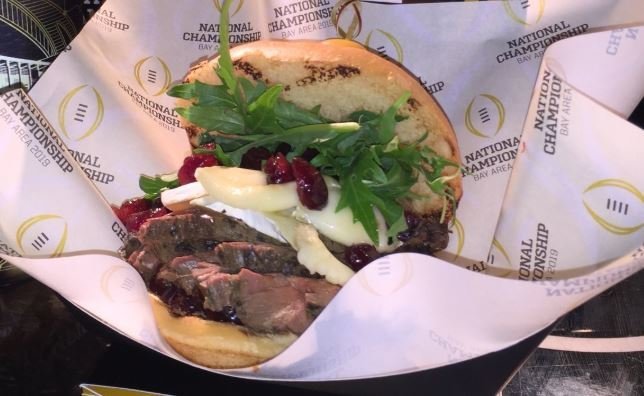 One of my favorite things to do on football road trips is to try out different tasty foods and refreshing drinks local to the area.

For fans taking the long voyage to the College Football Playoff National Championship game on Monday, Jan. 7, there will be a couple custom menu choices at Levi's Stadium.

Levy Senior Executive Chef Jon Severson told ABC7 News that he made a new foods selections for the matchup between the Crimson Tide and the Tigers.

The 'Clemson Tiger Slider' might become a fan favorite for Tiger fans at the game.

"Got a little bit of grilled tri-tip, a little marinade of ginger and some garlic," Severson said about the slider. "Melted brie and some rooftop greens from Faithful Farm here at Levi's Stadium."

Alabama's custom food idea was called the 'Alabama Slamma' which is a burger with tasty smoke brisket, a couple hot links included, and smothered in Dr. Pepper barbecue sauce.

Also at the game, check out the Niners' Bay Area Tots which is a local favorite consisting of shrimp, white cheddar, scallions, and tots.