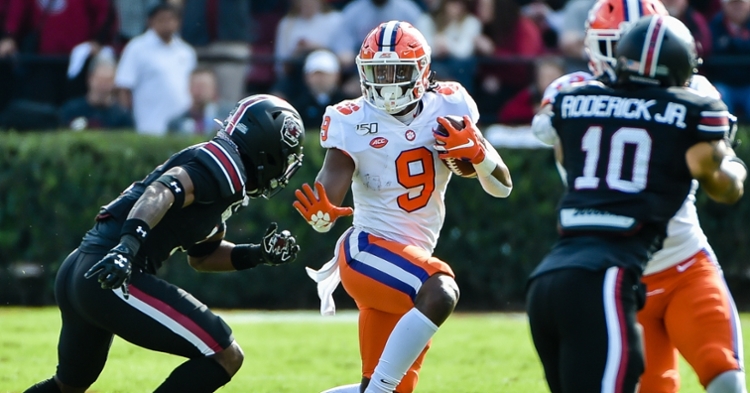 Etienne has won ACC Player of the Year each of the last two seasons.

Clemson's all-time leading rusher and one of the nation's most dynamic players is returning for his senior season.

Travis Etienne made the call that he's coming back on the initial deadline day for draft-eligible players.

He ranked second nationally in yards per carry last season (7.8), totaling 1,614 yards and 19 rushing TDs and 432 receiving yards and a career-best four TDs receiving. He set the single-season school rushing record in the previous year (1,658).

"I want to thank you for all of the love and support you've shown me over the last three years at Clemson," Etienne said in the statement addressed to 'Clemson Family.' "All year long, I was asked questions about how special it has been to have my name mentioned with some of the great running backs in Clemson history, ACC history and college football history.

"And even to this day, looking back on all we've been able to accomplish with the help of my coaches and teammates, I still can't believe what a ride it has been."

Etienne has won ACC Player of the Year each of the last two seasons. He picked up first-team All-America honors as a sophomore and second-team honors as a junior.

Pro Football Focus regarded him as the top running back prospect for the 2020 NFL draft, albeit with a second-round grade.

“Etienne sustained the elite rushing grade he had in 2018,” PFF analyzed before Monday’s game, after lauding his improvement as a receiver. “He produced a higher rate of explosive runs and was far better after contact — Etienne averaged 5.2 yards after contact per attempt, which led the FBS and was better than over 100 other running backs’ average yards per attempt in general. Not to mention, he averaged .45 broken tackles per attempt, leading the country.”

All seriousness.....@swaggy_t1 might go down as the best running-back EVER in college football history with him coming back for his SR campaign. Definitely will be in the discussion. Check the NUMBERS ??