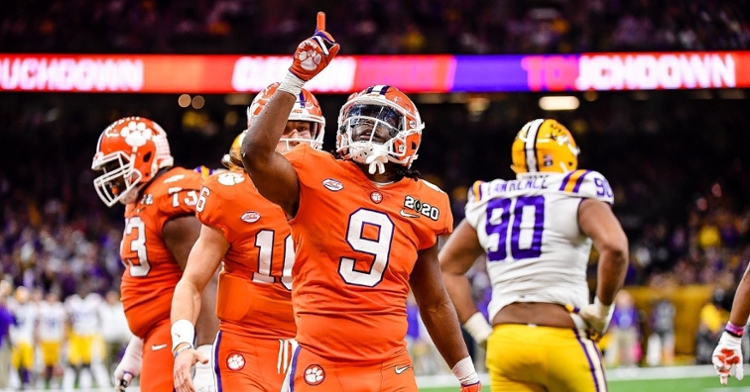 Tigers vs. Tigers was watched by over 25 million

The LSU vs Clemson audience also resulted in cable’s best viewership – across all programming, sports and otherwise – since the Alabama-Georgia College Football Playoff National Championship (Jan. 8, 2018).

ESPN’s MegaCast audience peaked at 29,200,000 viewers, after LSU took the lead for the first time late in the second quarter (9:45-10 p.m.). The LSU Tigers would never trail again in the game.

Solely on ESPN, the primary telecast of LSU-Clemson delivered an audience of 25,004,000 viewers, up 3% from the same presentation of the CFP National Championship last season (24,322,000 viewers).

LSU-Clemson’s MegaCast audience is on pace to surpass the audiences for all three Clemson-Alabama CFP National Championship matchups once this season’s full Nielsen data is reported. As a result, LSU-Clemson is likely to finish as the third most-watched CFP National Championship. Full streaming audiences will be available next week, and out of home viewing, in a few weeks.

This year’s College Football Playoff averaged 21,646,000 viewers across the three games, up 4% from last season and surpassing the three-game CFP average in the 2015. Once full data is reported, the audience average will top the 2016 season three-game average as well, solidifying this year as most-watched when the Semifinals were played outside of New Year’s Day. Full streaming audiences will be available next week, and out of home viewing, in a few weeks.

Individual market data for New Orleans and Greenville, S.C., will be available in the next 24 hours.

ESPN’s MegaCast Presentation offered multiple productions for the game; however, only ESPN, ESPN2, ESPNU and ESPNEWS’ audiences are represented in this release. ESPN Deportes is Nielsen-rated, but data is not currently available and won’t be used in final audience total.