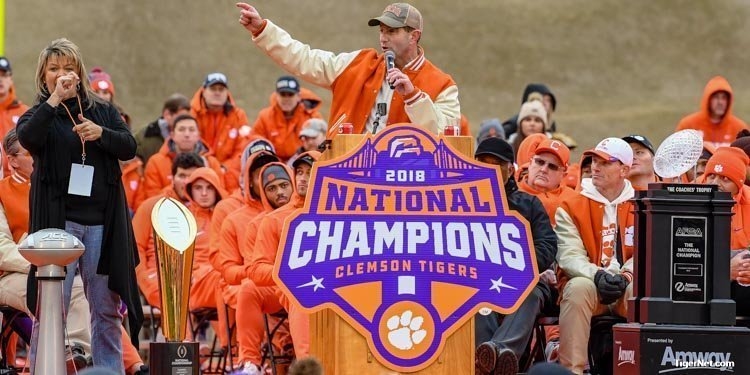 McMurphy sees Clemson as the AP preseason No. 1 in August, which would be a program-first.

Clemson and Alabama will likely top the polls one way or another this season (and beyond) but not everybody sees them as the top-two for 2019.

Stadium's Brett McMurphy released his pre-spring top-25 rankings that puts the reigning champ Tigers on top and then SEC runner-up Georgia next. Alabama checked in at No. 3.

"Clemson enters 2019 looking to extend its NCAA-record streak of eight consecutive seasons finishing the year ranked higher or equal in the final Associated Press poll than it was in the preseason AP poll," McMurphy writes. "In two of the past eight seasons, Clemson started No. 2 in the preseason, but ended up ranked No. 1 after winning the national title (2016 and 2018). Clemson likely will have to repeat as national champions to keep that streak going because I believe the Tigers will be preseason No. 1 when the AP poll is released in August."

"Alabama had a program-record seven early entrants into the NFL Draft," McMurphy said on the Crimson Tide. "In all, the Crimson Tide will have a national-best 11 players at the NFL Scouting Combine. The Crimson Tide also must replace seven assistant coaches, a year after losing six full-time assistants. And for the third consecutive season, Alabama will have a new offensive coordinator and defensive coordinator. Will the large amount of turnover make Alabama vulnerable in 2019? I believe so."

Oklahoma rounds out Stadium's 2019 projected top-four, with Ohio State and Florida knocking on the door.

"Coach Dabo Swinney welcomes the challenge," McMurphy said. "Even though Clemson’s defense only returns four starters, Swinney is not concerned. 'I think we have a lot of guys that y’all don’t have no idea who they are right now,' Swinney said the morning after beating Alabama in the 2018 title game. 'But this time next year everybody is going to know who they are.'

The only ranked regular-season opponent is Texas A&M at No. 9, as no other ACC teams made the list.

Find out why @Brett_McMurphy has #Alabama ranked No. 3? in his pre-spring college football rankings. #RollTide pic.twitter.com/VYi6bn5tmc