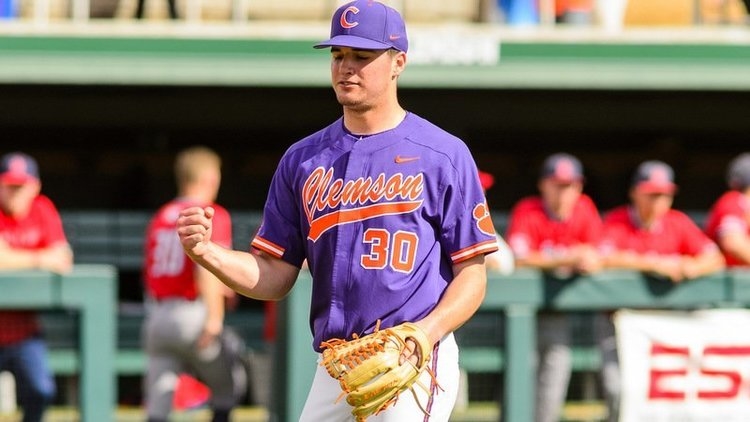 CLEMSON, S.C. - The 2020 Tiger baseball schedule features 34 home games, including a nine-game homestand to start the season, and 28 games against 2019 NCAA Tournament teams. Clemson, who is set to begin its 123rd season, starts it 56-game schedule on Feb. 14 at 4 p.m. with the first of three games against Liberty at Doug Kingsmore Stadium. All game times for the 2020 season are subject to change.

Clemson’s nine-game homestand to open the season includes three-game series against Liberty and Stony Brook, teams who won their respective conferences in 2019 and played in the NCAA Tournament. After the Liberty series, the Tigers host The Citadel and Furman in midweek games before facing Stony Brook for the first time to complete the first of their two five-game weeks in 2020. The Tigers close the homestand with a midweek game against East Tennessee on Feb. 25.

The Tigers and Gamecocks square off in a three-game series, beginning Friday night, Feb. 28 at South Carolina. The two teams play again in Columbia the following day, this time at Segra Park, before concluding the series at Doug Kingsmore Stadium on March 1. The two rivals have met 321 times.

The series finale against the Gamecocks begins Clemson’s seven-game homestand, followed by a game against College of Charleston on March 4. The Tigers begin ACC play against Boston College on March 6 before wrapping up the homestand with midweek games against Presbyterian College and Winthrop.

Clemson plays its next two ACC series on the road against Wake Forest and Notre Dame, with a game at Coastal Carolina in between, before hosting Coastal Carolina on March 24 and Georgia Tech in a three-game series from March 27-29.

The Tigers return to Segra Park on March 31 to play College of Charleston again, then they play Pittsburgh at Doug Kingsmore Stadium for the first time since 2016.

Clemson begins an eight-game roadswing and 12-game stretch with 11 games against 2019 NCAA Tournament teams with a game at Georgia on April 7 before traveling to Louisville for a three-game series. Clemson returns to the Palmetto State to play Furman at Fluor Field, then travels to Durham Bulls Athletic Park to take on Duke in three games.

The Tigers conclude the home-and-home series with Georgia at Doug Kingsmore Stadium on April 21 to begin an eight-game homestand, then they host NC State in a three-game series. After final exams, the Tigers play William & Mary three times in two days on May 2 and May 3 before concluding the homestand against Charleston Southern.

The ACC Tournament format, in its fourth year, features four pools with three teams in each pool. Pool play takes place on Tuesday, Wednesday, Thursday and Friday, with three games per day. Each pool plays a round robin, with the top team advancing to the semifinals. The semifinals take place on Saturday, followed by the championship game on Sunday.

Season tickets, including season-ticket renewals and new orders, are on sale for as low as $180 on ClemsonTigers.com. For more information on tickets, call 1-800-CLEMSON or click HERE.