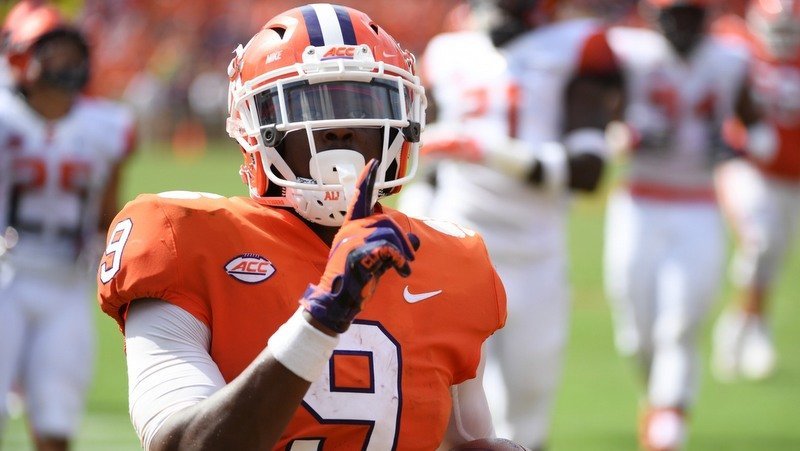 Travis Etienne has punched in a number of scores in an ultra-efficient Clemson red zone offense.

Clemson’s championship phase will follow a certain formula on the road to another College Football Playoff run: the Tigers as a heavy favorite.

The Tigers opened with a 17.5-point edge in a key divisional matchup at Boston College Saturday and that moved quickly to 20 points early in the week. SB Nation’s S&P+ formula projects Clemson as at least an 18-point favorite versus the final three regular-season opponents in Boston College, Duke and South Carolina.

If those results hold as projected, Clemson is then at least a 25-point favorite against potential Coastal ACC Championship foes Virginia (25), Virginia Tech (27) or Pittsburgh (29).

This weekend’s matchup features a Boston College team with a solid defense and an average-but-unique offense in efficiency.

This week’s projections tend the favor the home side with the Vegas line but still see a comfortable Clemson win. The Football Outsiders’ metrics see dual 18-point wins with the S&P+ taking the Tigers, 35-17, and the FEI picking Clemson, 34-16. ESPN-affiliated TeamRankings is on a similar track, 38-20, and numberFire sees a much closer affair, 36-25.

Key to Clemson’s 51-point average margin of victory in the last four games has been exceptional efficiency in the red zone.

In the four-game stretch, the Clemson offense has 23 scores in 25 red zone chances and 20 of those have been touchdowns. The Tigers defense has only allowed two red zone trips a game in the run with less than a TD per contest allowed (0.75).

# Success rate is determined by gaining 50 percent of the necessary yardage on first down, 70 percent on second down and 100 percent on third and fourth down.

^ Percentage of carries in which the offensive line is able to produce at least five yards for a carrier to rush the ball.)