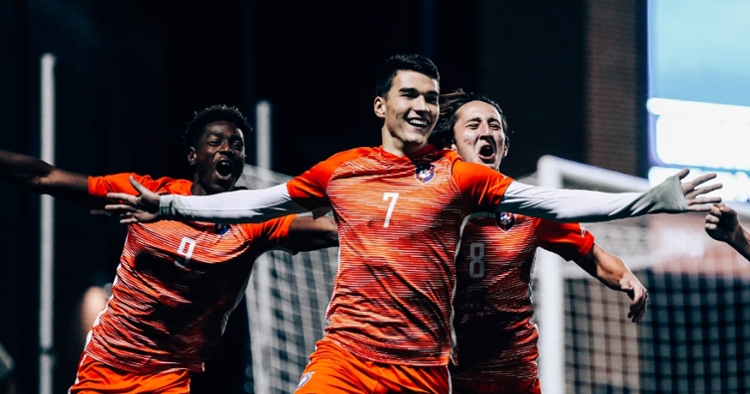 Clemson, S.C. –The second-seeded Clemson men’s soccer team is set to host its final match of the season at Historic Riggs Field as they welcome the seventh-seeded Stanford Cardinal in NCAA quarterfinal action Friday night. The match will be the third all-time meeting between the two sides, with all three coming in the NCAA Tournament. The match will feature three semifinalists for the MAC Hermann Trophy, after Clemson had two players, Robbie Robinson and Philip Mayaka, and Stanford had Tanner Beason named to the 15-person semifinalist list.

Friday’s match will be just the third all-time meeting between the two sides, with all coming in the NCAA tournament.

The Clemson program will be in search of its first win over the Cardinal in Friday’s match.

This will be the second time that the two sides meet in the quarterfinal round of the NCAA tournament.

The match will be the 31st meeting against a school from California for the Tigers.

The Tigers enter the match holding the second seed in the NCAA Tournament and are ranked third in the United Soccer Coaches poll.

Clemson’s 69 goals remain the most by a team in the NCAA this season. The team’s average of 3.28 goals per game gives Clemson the most potent scoring offense rating in the nation.

Clemson is making its sixth appearance in the NCAA tournament in the past seven seasons.

Clemson is led in scoring and points by Robbie Robinson, with 18 goals and 45 points on the year thus far.

Clemson is led in assists by Tanner Dieterich. Dieterich, with 10 assists, is the lone player for Clemson to have double-digit assists this season.

Clemson is making its 32nd appearance in the NCAA tournament during the 2019 season.

The Tigers are 52-25-7 in the NCAA tournament. Of the seven draws which the Tigers have had, Clemson has advanced out of three of the matches.

The Tigers are 7-6-1 in the quarterfinals of the tournament.

The trio of Kimarni Smith, Robbie Robinson and Grayson Barber have combined to score 41 goals, contribute 22 assists and total 104 points. The trio has scored 27 goals at Historic Riggs Field this season.

Entering the weekend, the trio has combined to score more goals than 181 teams and more points than 161 teams in all of NCAA DI men’s soccer.

Stanford is led by Head Coach Jeremy Gunn. Gunn is in his eighth season at the helm of Stanford’s program.

The Cardinal advanced to the quarterfinals after defeating Virginia Tech, 2-1.

Stanford is in the quarterfinals for the fifth consecutive season and ninth time in program history.

Stanford is led in scoring by Zach Ryan and Gabe Segal, each with six goals on the year.

Logan Panchot leads the team in assists with eight on the season.

Stanford has held opponents to only 13 goals on the year.