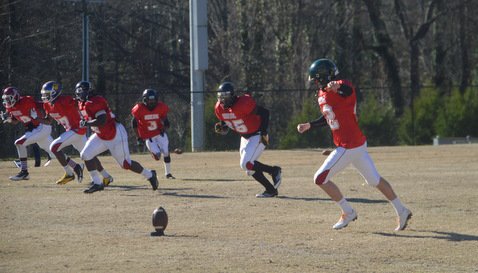 Alex Spence works out at the Shrine Bowl last week

View Full Profile might have given Clemson fans a glimpse into the future last Saturday.

The 2014 Clemson commit out of Florence (SC) West Florence capped off a stellar senior campaign by hitting all four of his extra point attempts and punting seven times for a 36.9 yard average in South Carolina’s 28-23 win over North Carolina in the Shrine Bowl of the Carolinas at Wofford last weekend.

Spence said that the past year has been a whirlwind, and ending his high school career in the Shrine Bowl was a singular honor.

“It’s a tremendous honor. There are a lot of good athletes out here and to be selected to be the kicker on this team is pretty special,” he said.

Spence said that he has been putting in extra work so that he will have a chance to compete for Clemson’s kicking job next fall – senior Chandler Catanzaro is graduating, and Spence will likely compete against Ammon Lakip for the starting job.

He said being a kicker means a lot of work away from his teammates and coaches.

“Not a lot of people realize how much work it is. Maybe my family does, because they see me at home doing all of the work, doing drills and watching film,” Spence said. “But a lot of work is done off the field. They see us on the field and we are stretching, but we’re like pitchers in that there isn’t a lot we can do out on the field. But we can go back and watch film and analyze our swings. I watch at least minutes of film and do a lot of stretching and muscle memory drills.”

Spence told TigerNet that he will be on Clemson’s campus in June for one of the summer sessions.

“I can’t wait to get there,” he said. “I chose Clemson because of the overall atmosphere there. Of course, it is a beautiful campus and a great place to live. That is one of the things I was really looking for in a college – great academics and a good place to live over the next four years and maybe after I graduate. That played a big factor there. Everybody there is really nice and friendly.”